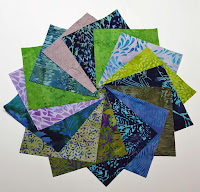 Rafflecopter chose the first winner, Edith G. who lives out of the USA,
she received a PDF of the pattern I designed and used to make the quilt.
I had Rafflecopter choose a second entry, which was Mary F.,
who does live in the USA,
and I will be sending her the fabric squares.
Congratulations to both these individuals.
And thank you to everyone who hopped with us in the blog hop.
a Rafflecopter giveaway

Tomorrow The Road Home Row Along begins. It is hosted by Marian of Seams To Be Sew and Amy of Sew Incredibly Crazy. There are so many designers who have created a variety of patterns. The patterns are offered FREE to those who hop with us during September. And, WOW! Marian has gathered some many sponsors for giveaways (too many to mention is this short post). Begin at SEAMS TO BE SEW tomorrow and Marian will have information as we begin a busy blogging month.

On September 7, come back here as I show an easy construction method for tablerunners usng 5-inch squares and fusible interfacing. Our guild went about making this variation of Memories of Sochi quilt using this method. 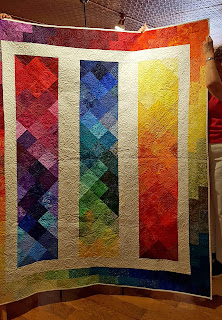 The Island Batik Ambassadors will be making table toppers to show you during September. Check out what is being posted at the Island Batik Blog and on Facebook. Mine is almost quilted, so that will be posted next week.