On the Road Again

Welcome back for a rundown of events on

Our day started with an early departure at 7:45 am. We took a tour of the countryside on winding back roads on our way to Blue Smoke Salsa in Ansted, West Virginia, where we learned about the company and tasted some of the products.  We watched as they filled and packed the jars with salsa. Robin Hildebrand is such a down-to-earth entrepreneur and her story was very interesting. Of course, most of us bought some of the products we sampled! I bought some gifts and some for me. 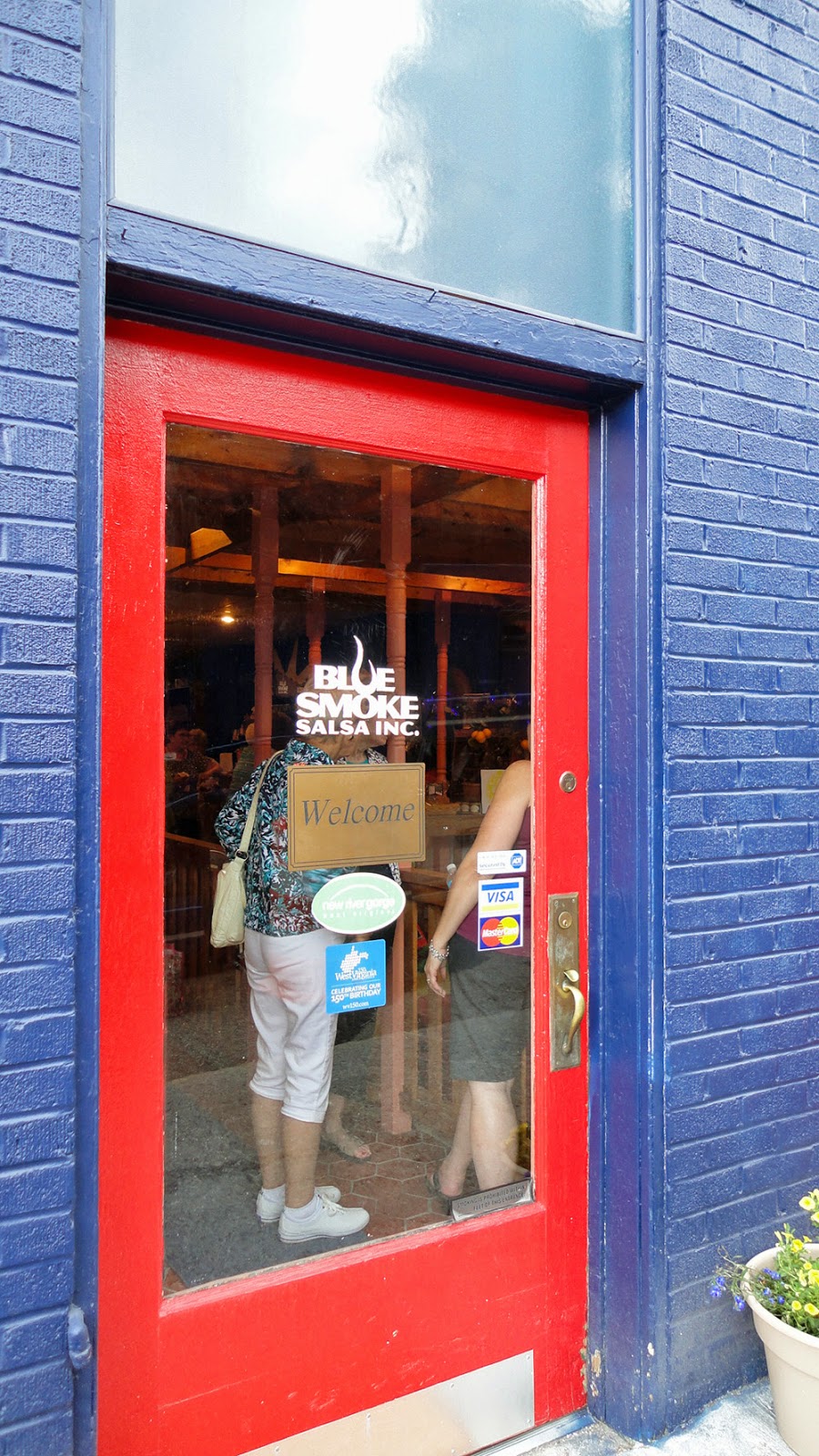 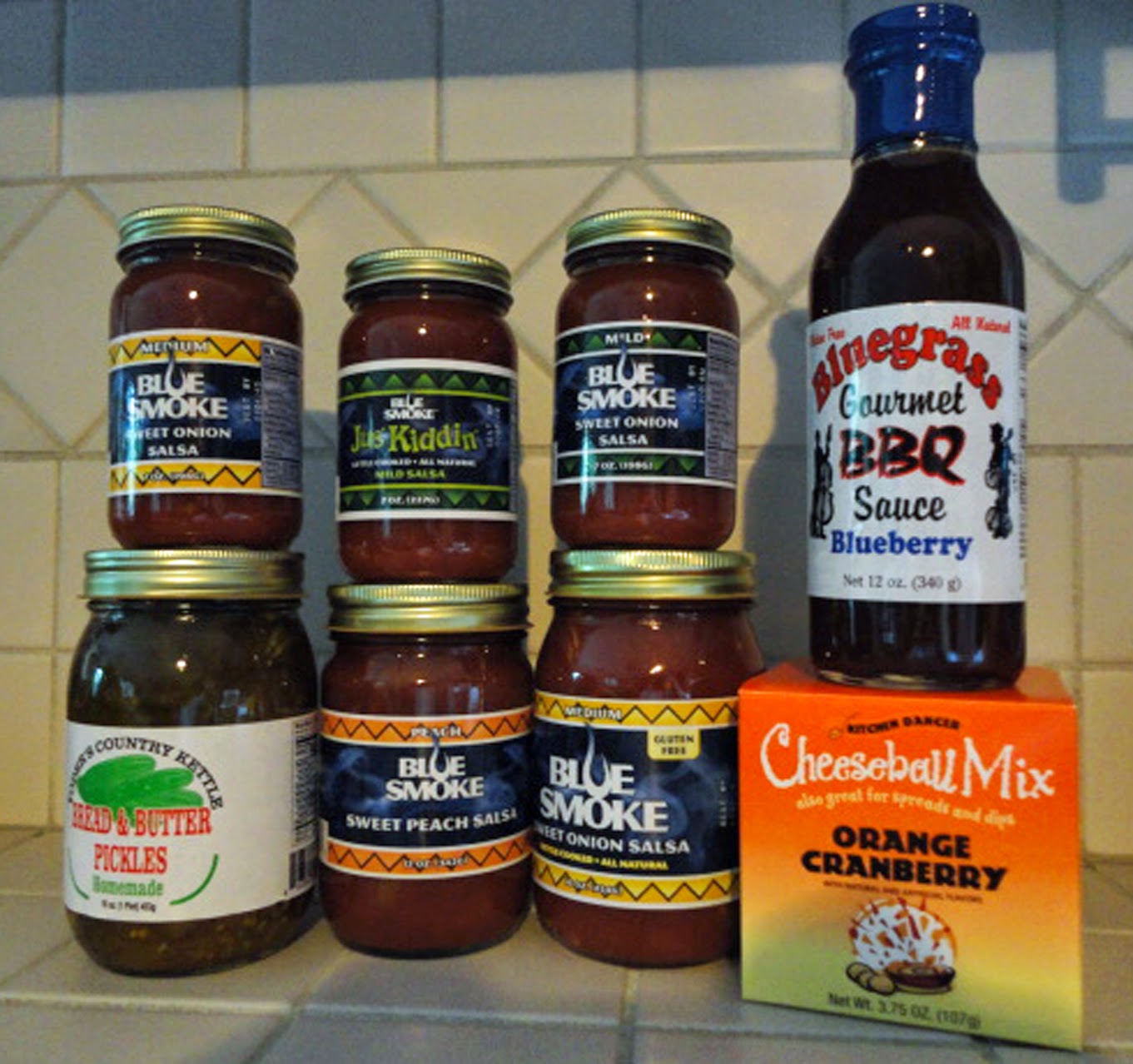 The New River Gorge Bridge in Fayetteville was our next destination. The view of this engineering marvel nestled in the Appalachian Mountains is breath-taking. We rode down a tram to the river for a jet boat ride that would let us see the bridge from below. 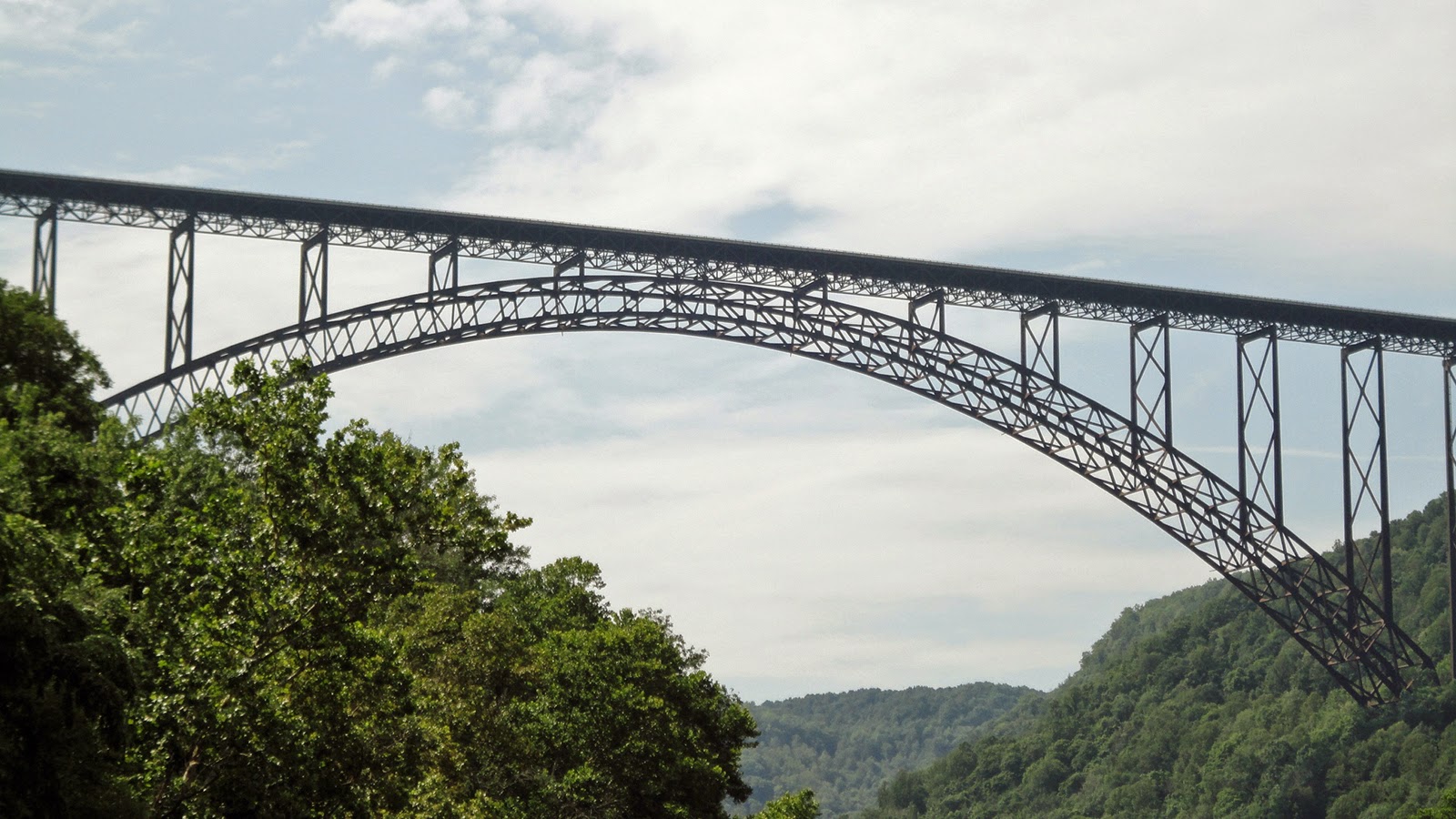 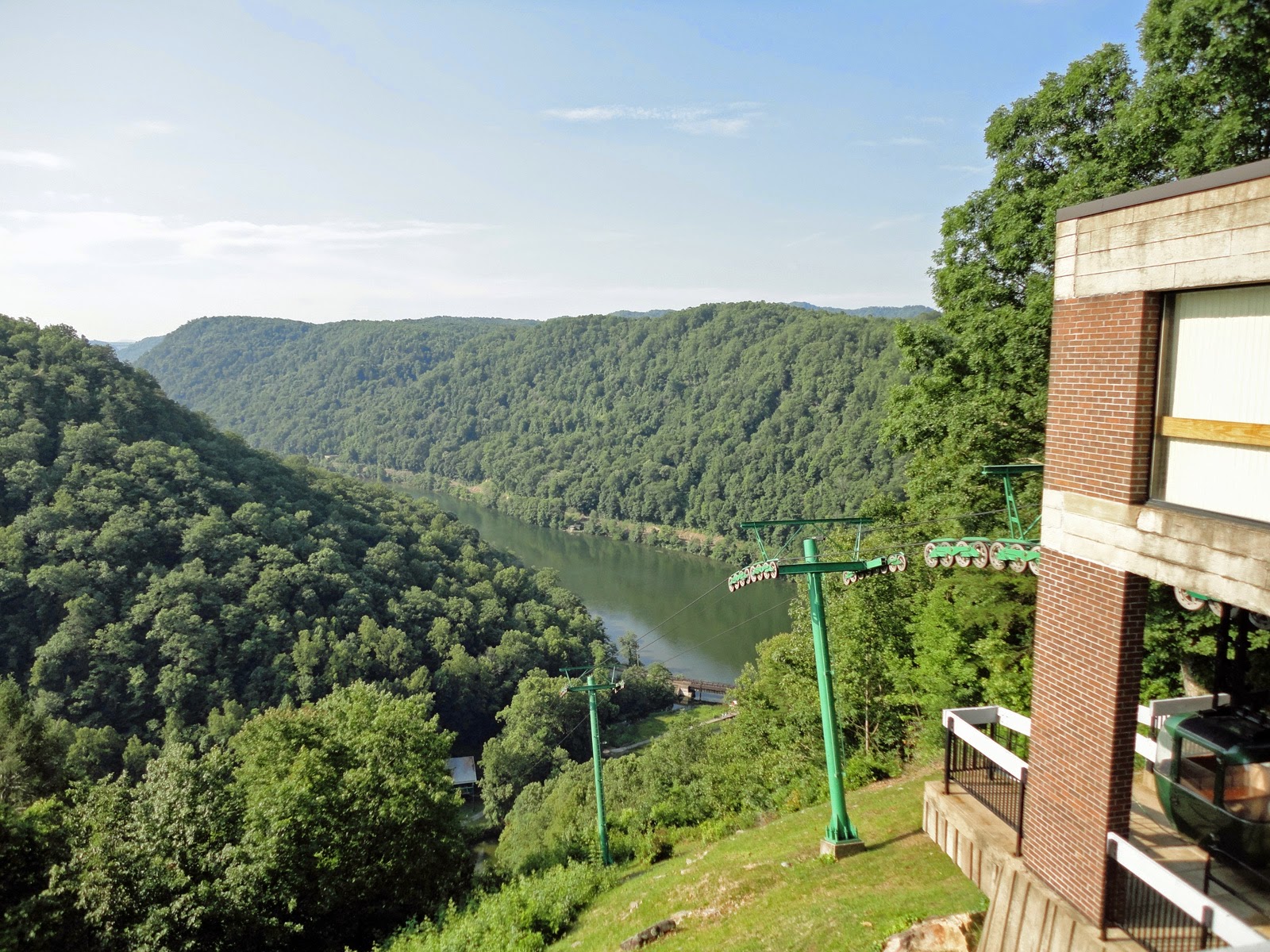 The captain of our jet boat was quite humorous and a good pilot, too. . . 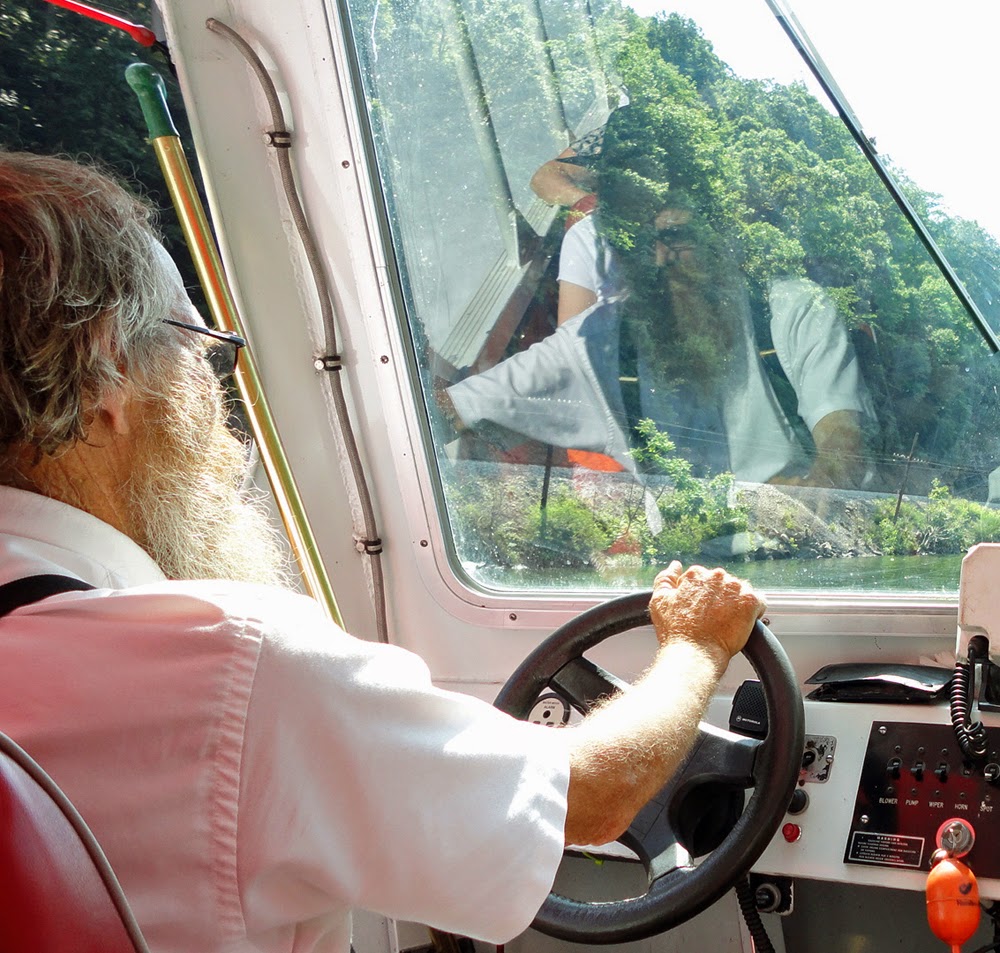 keeping us out of the rocks and in deeper water. The bus did take us on the bridge after our tour, but rain caused fog to form in the gorge, so we were not able to see the river below. 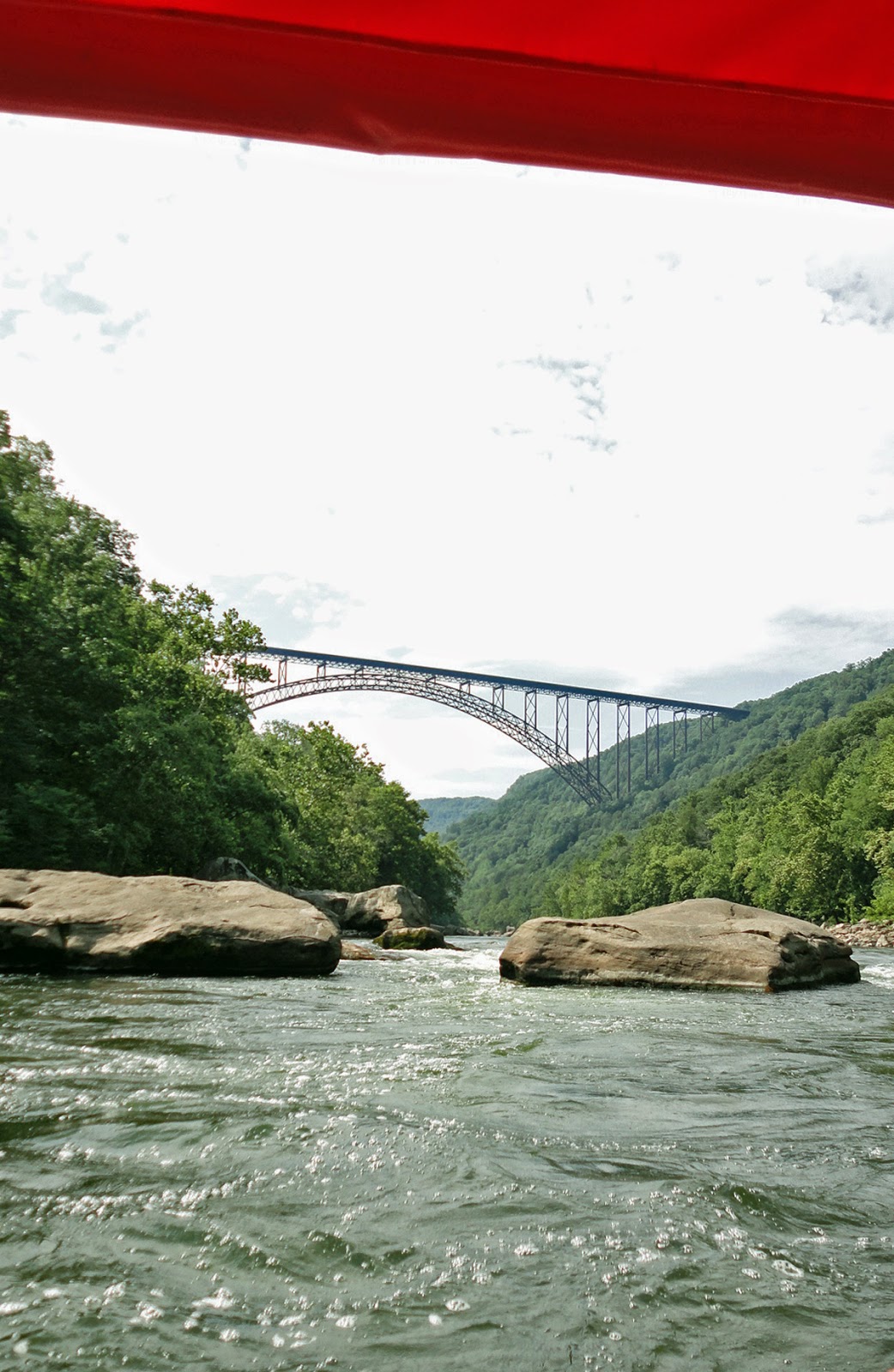 The Quilt Shoppe in Summersville was so nice. I did not spend as much today. I was looking for a fat quarter to contribute to our group's drawing. One person would win all the fat quarters at the end of the trip. The color theme was purple, green or beige. I bought a beige fat quarter here along with a little bit of fabric, some buttons, thread and a marking pencil.

Our evening ended in Lewisburg. We had dinner at a quaint restaurant. I had bourbon salmon. Some others had prime rib or egg plant caprise. 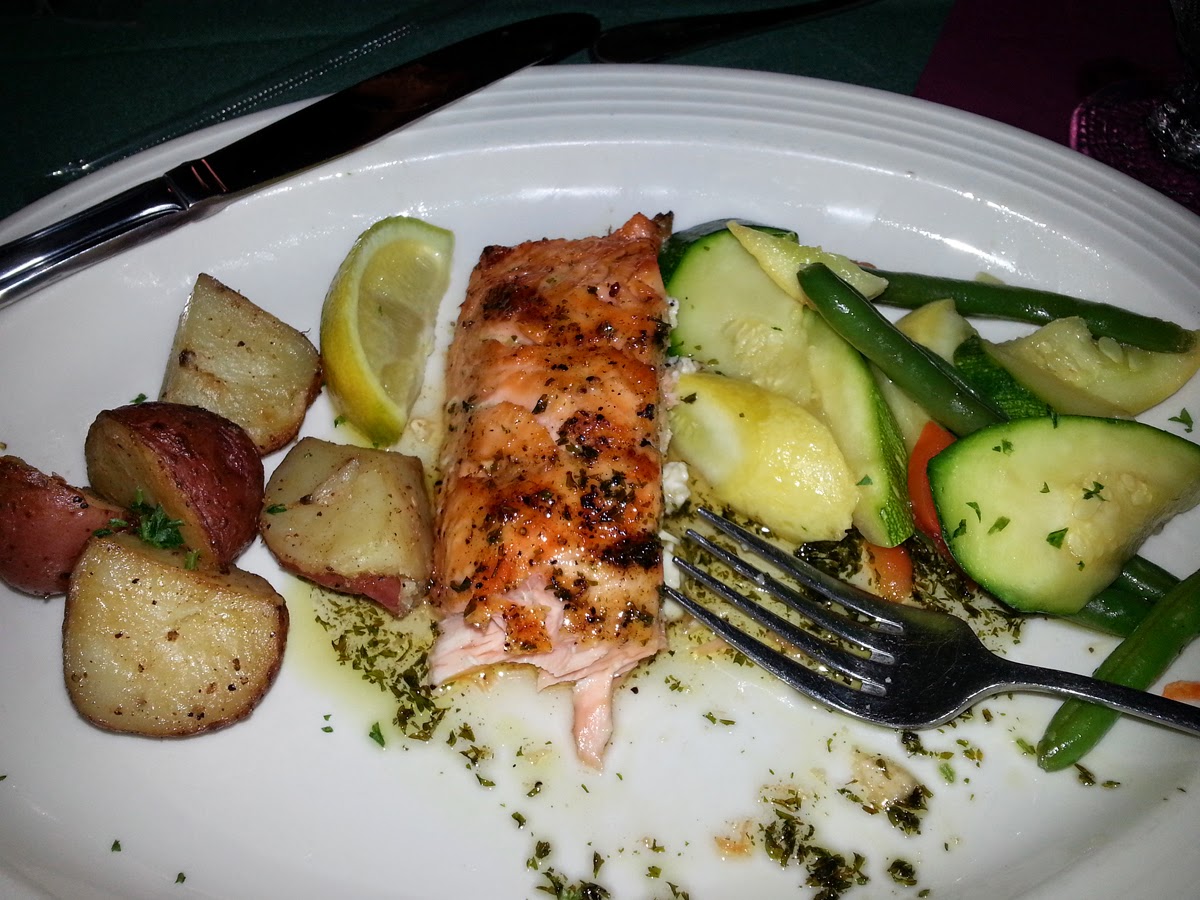 A step-on guide showed us a bit of historic Lewisburg. We learned about the Carnegie Hall built in 1902 by steel baron and philanthropist Andrew Carnegie as a classroom building for the Lewisburg Female Institute, later the Greenbrier College for Women. 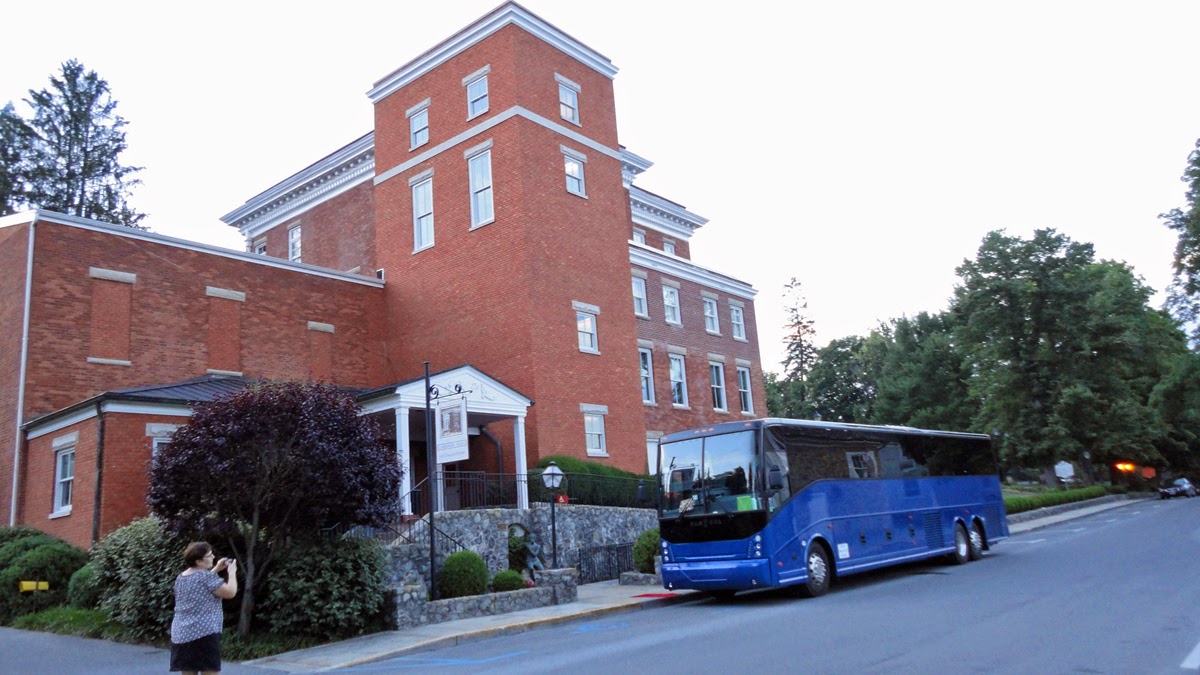 Across from Carnegie Hall is the Old Stone Presbyterian Church built in 1796. 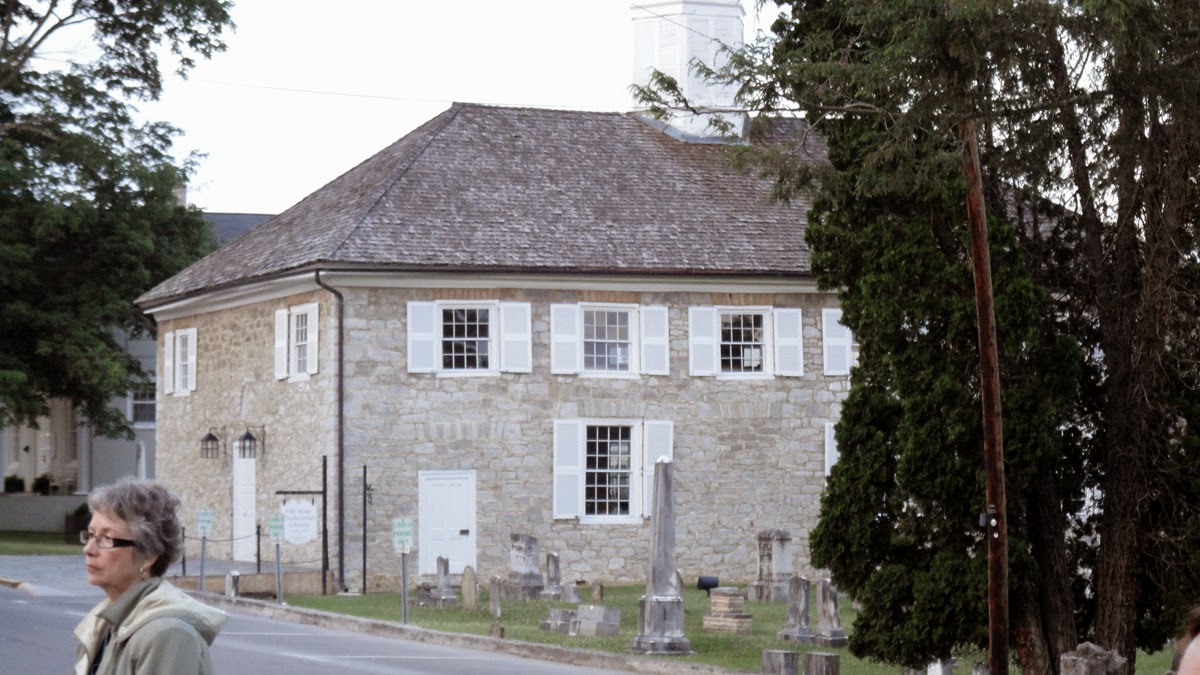 Next to the church is the Presbeterian cemetary and across the street is the African-American Cemetary. One historical sign honors Dick Pointer with a large gravestone marking his burial place. 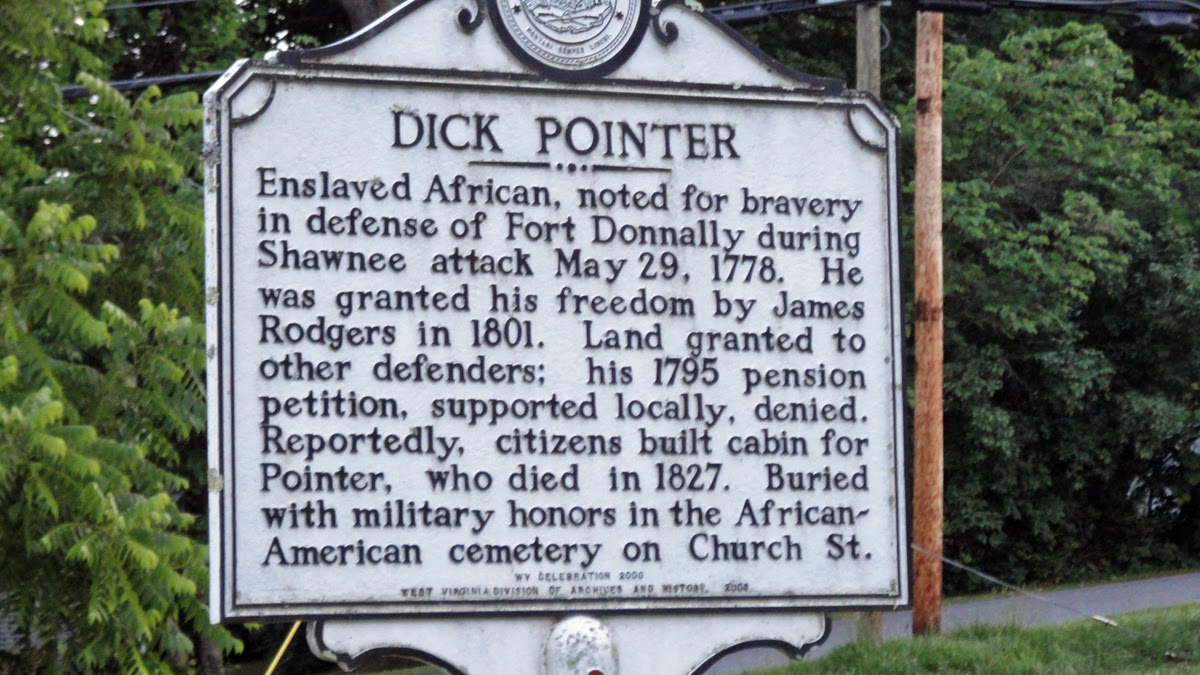 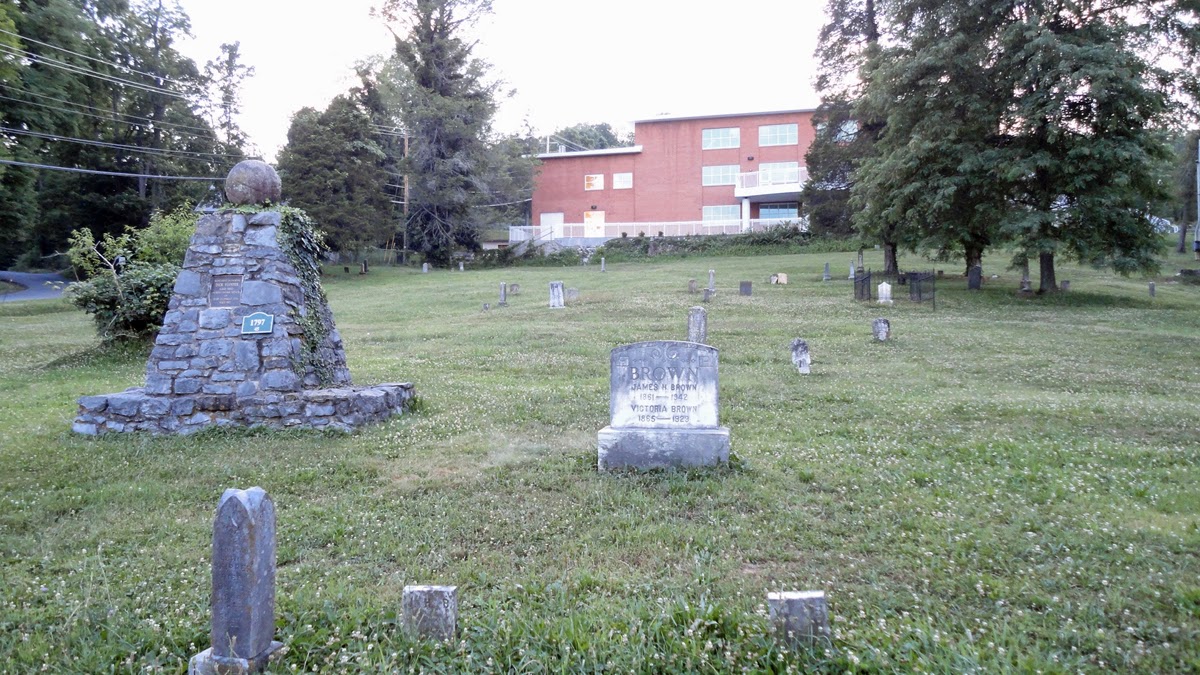 We had a restful stay at the Fairfield Inn and Suites in Lewisburg that evening. 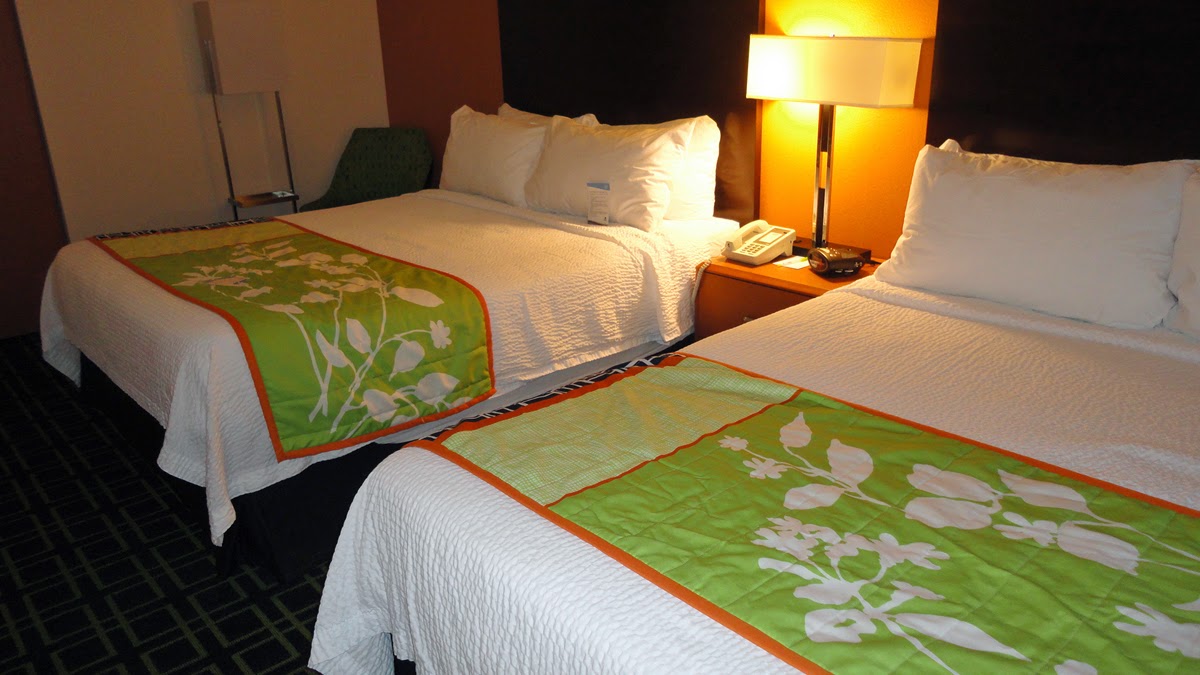 Have you been able to take a quilt-themed trip to places you have not been?

I am home from a 6-day quilter's trip. It was a wonderful trip by coach from Michigan to West Virginia. Xpedition Travel organized the excursion.

My parents always headed "West of the Mississippi River" on vacations with us. This is the second year I have been able to join this great group of quilters on one of their trips. (Last year was the Outer Banks of North Carolina.) I am seeing much of the country that I had not seen as a kid. If you ever have the opportunity to take a coach trip such as this, I hope you can. I want to share some of the highlights in my next few blogs.

We began our travels from Clare, Michigan, at 5:30 am with 3 pick-up stops as we headed to the Michigan-Ohio border. We had 56 quilters on the trip. We had rest stops along the way; but, our first quilt shop stop was Sew Many Blessings Quilt Shop in Huntington, West Virginia. A very nice shop where I spent a bit more than I had planned. I wanted to purchase something that spoke specifically West Virginia on this trip, so when I walked in (past the wonderful reception area where husbands can wait for their wives) and saw  a black and white panel with West Virginia themed drawings I knew I had found it. To make it better, they had a great pattern called "Picture This" by The Quilt Company. I am moving this quilt up on my "to make" list. 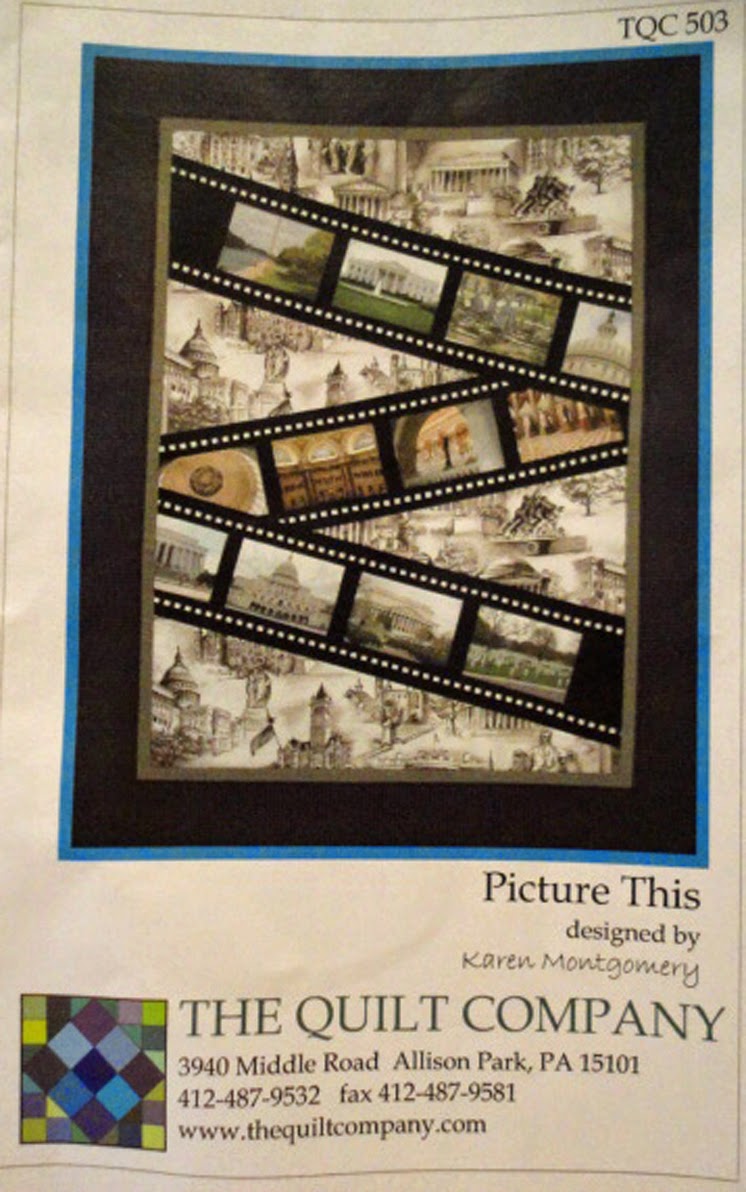 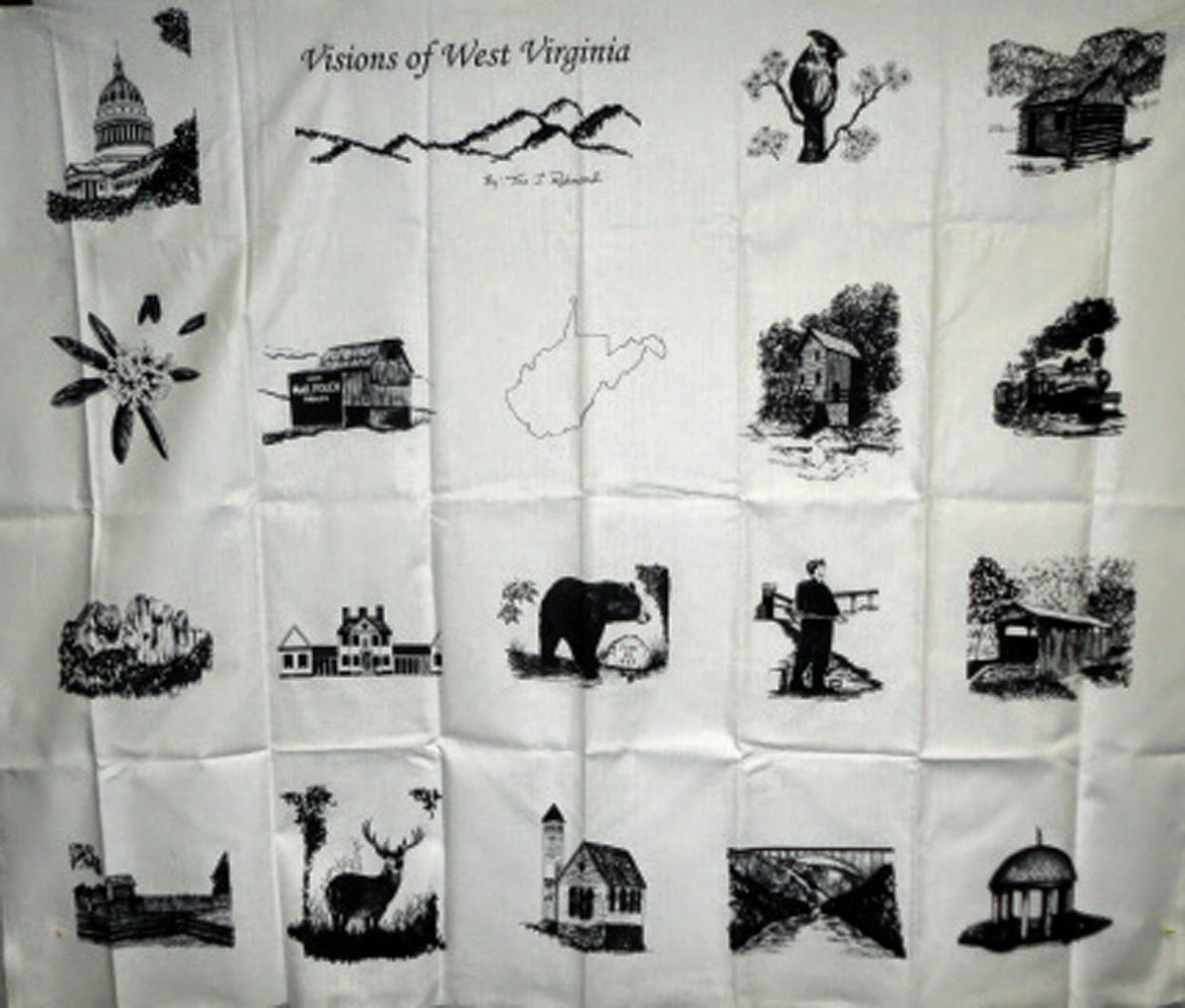 From there we made our way to Hillbilly Hot Dogs in Lesage, West Virginia to eat dinner. 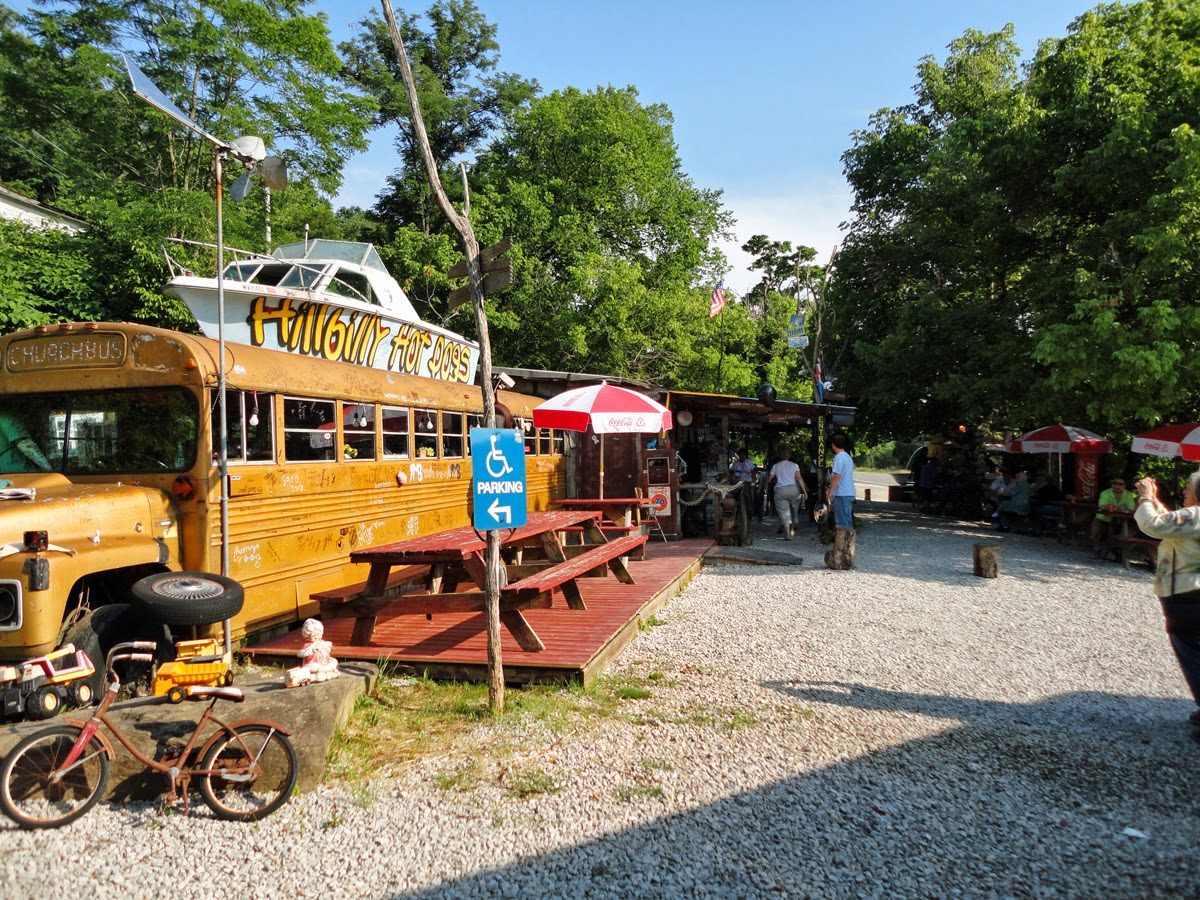 We all placed our orders. (I ordered a portobello dog with all the fixings.) Our travel guide said we just had to order the 30-pound hamburger--YES! 30 POUNDS! We all had a good sized piece of it - making us realize our other orders were a bit much. 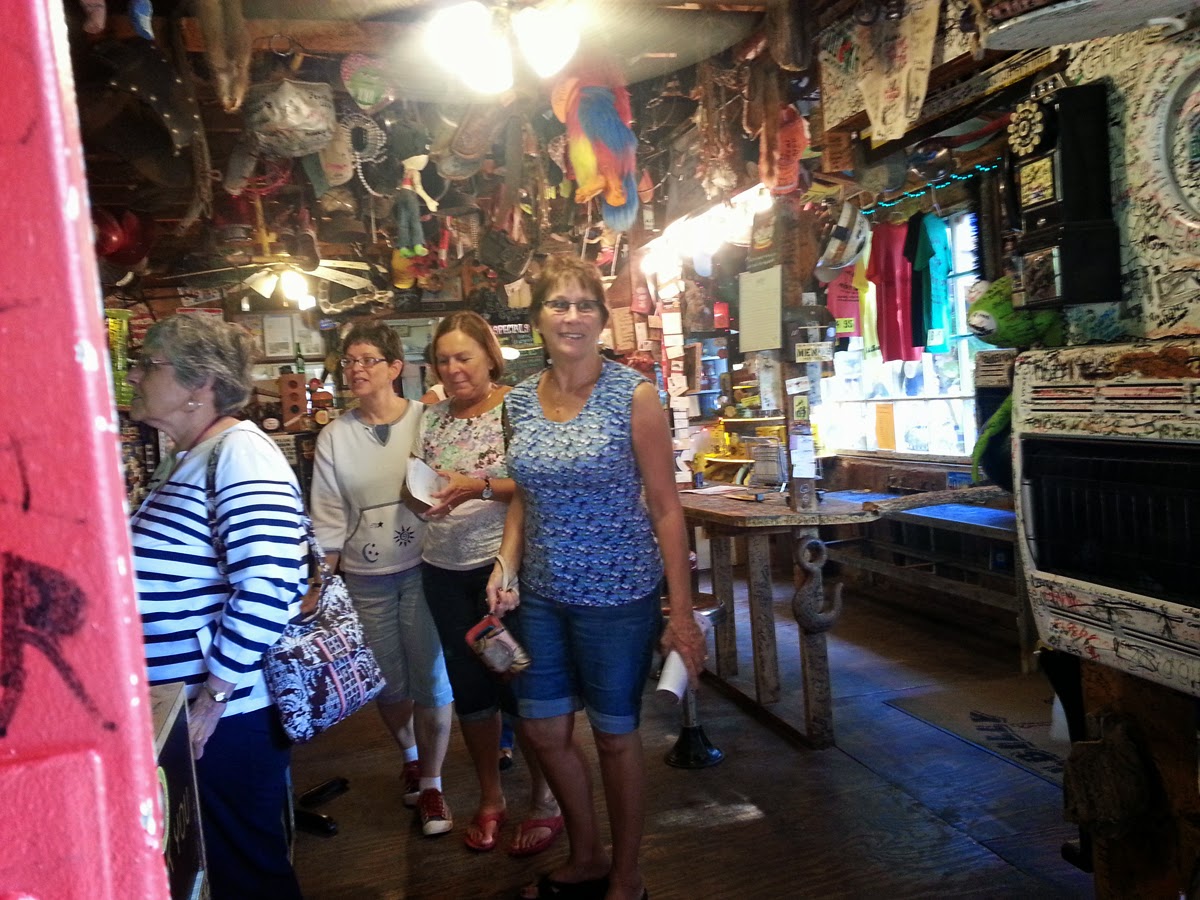 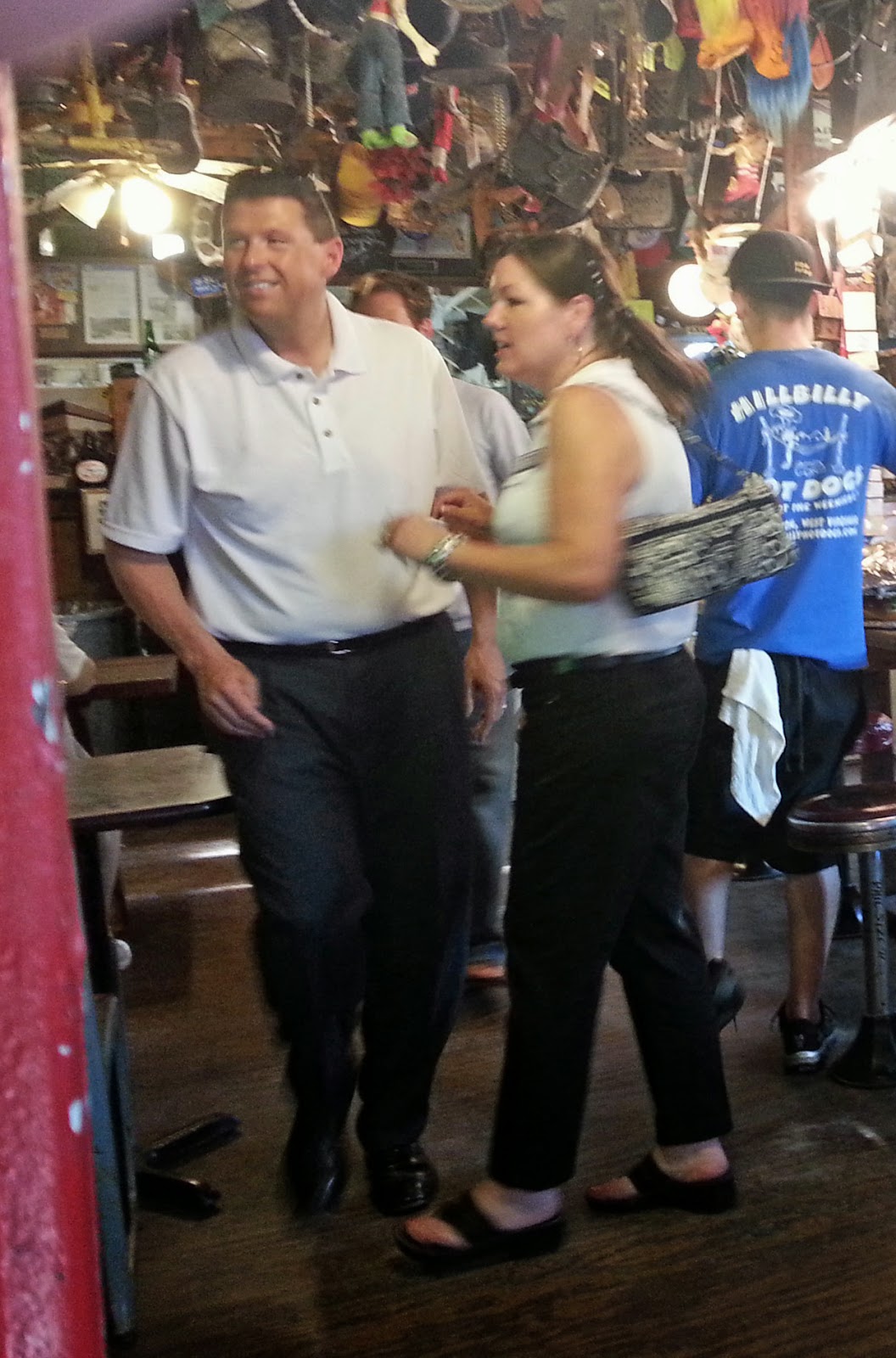 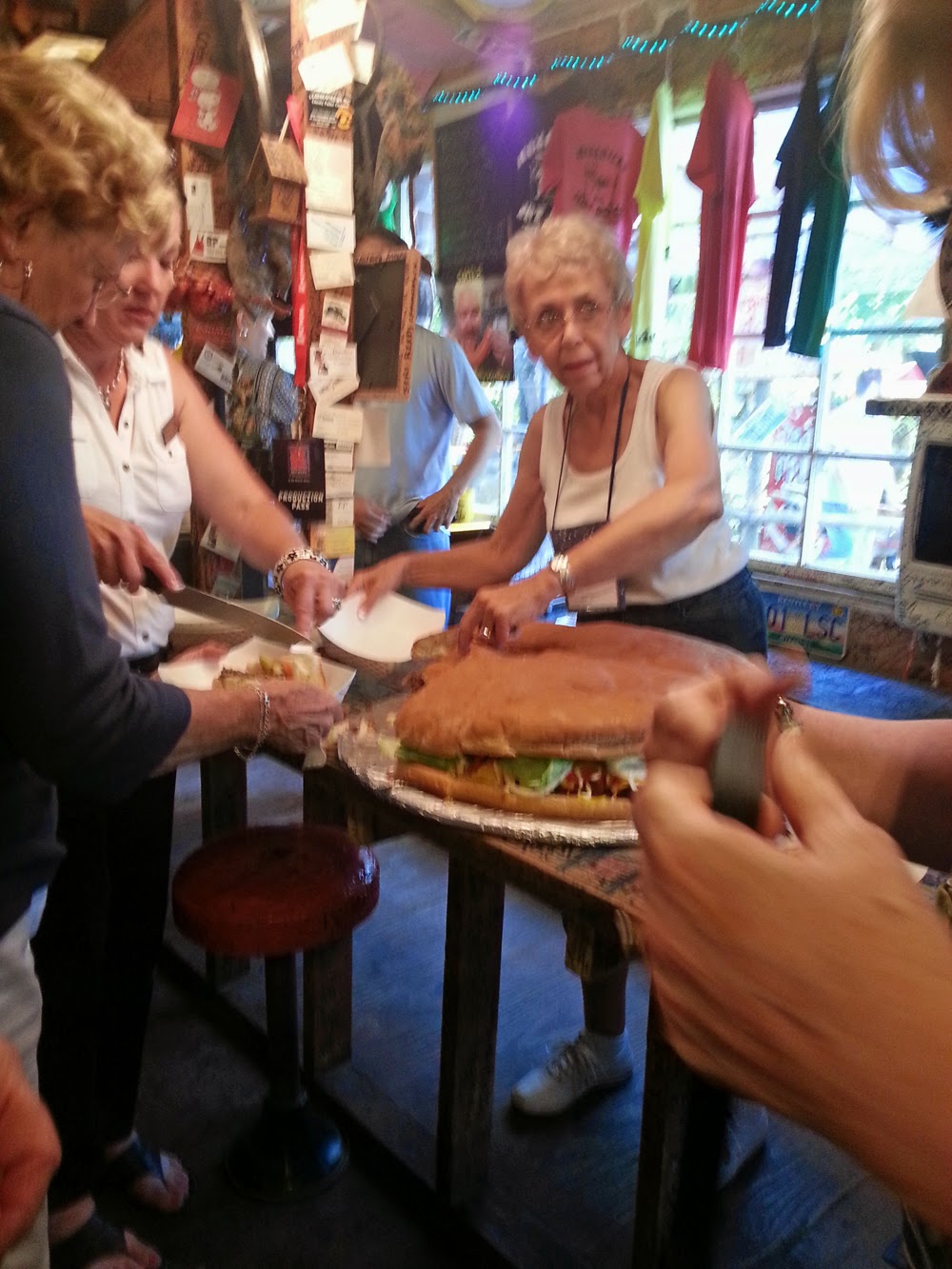 We ate in a yellow school-bus-turned-diner. Then had an interesting time wandering outside viewing all the "decor". 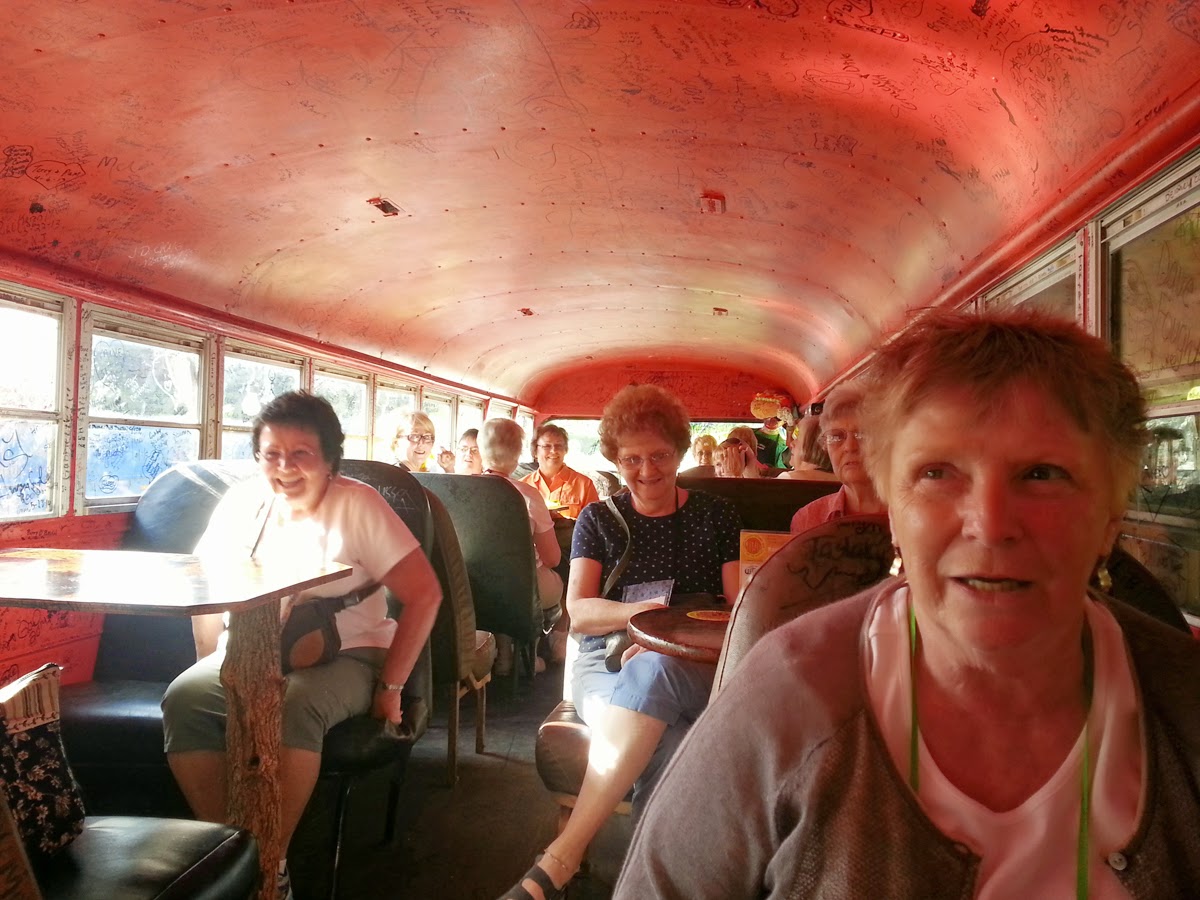 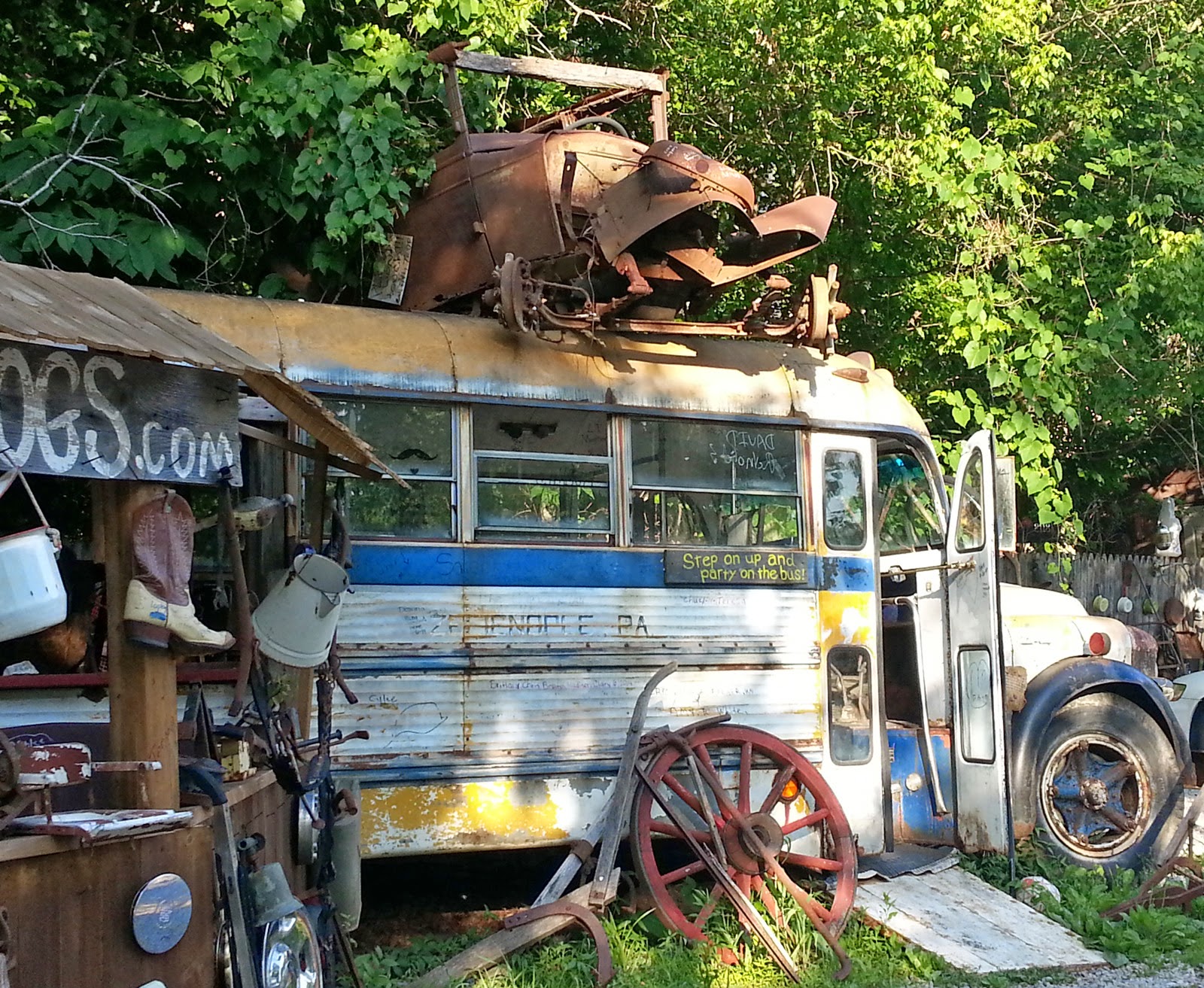 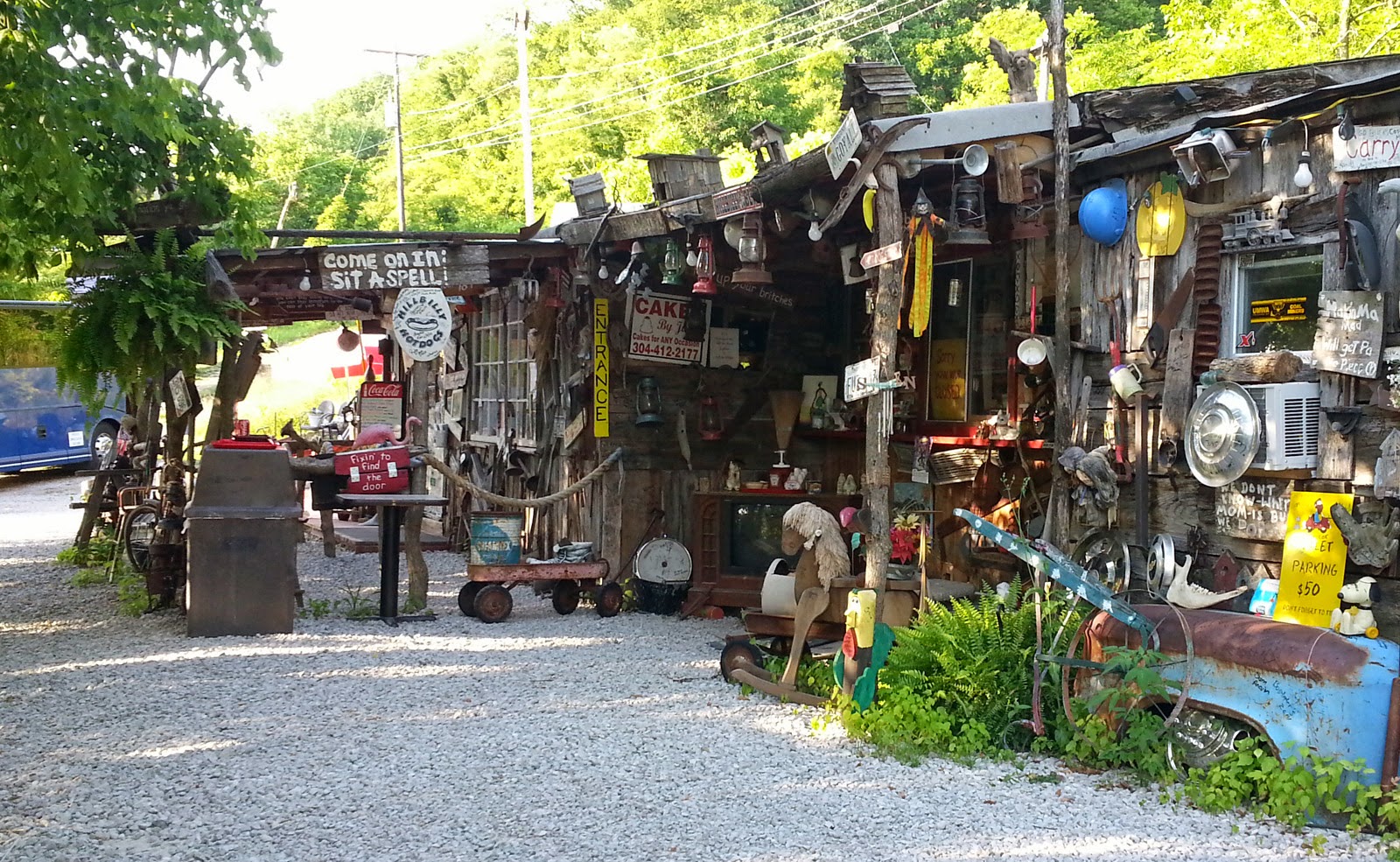 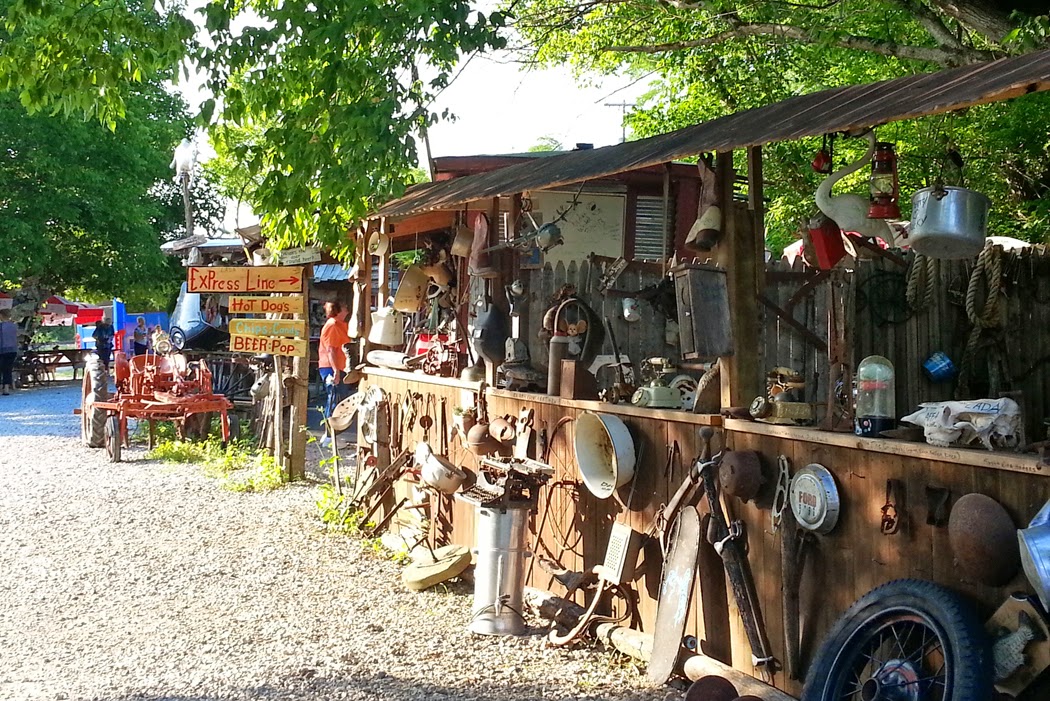 We headed a good distance to Cross Lanes, West Virginia to spend the night at the Sleep Inn and Suites.

I joined Beaquilter in her Swoon Block exchange. Participation has closed.
We make 2 blocks for each participant. We each were able to choose our color scheme. I got started this last week with my own blocks. I wanted to try the pattern and figured it would be better if I messed up my own than someone else's.
So I got my two blocks done. They measure 16 inches finished. Coral and teal with beige background are my color choices.
When I return from my travels, I will be happy to get started on them. 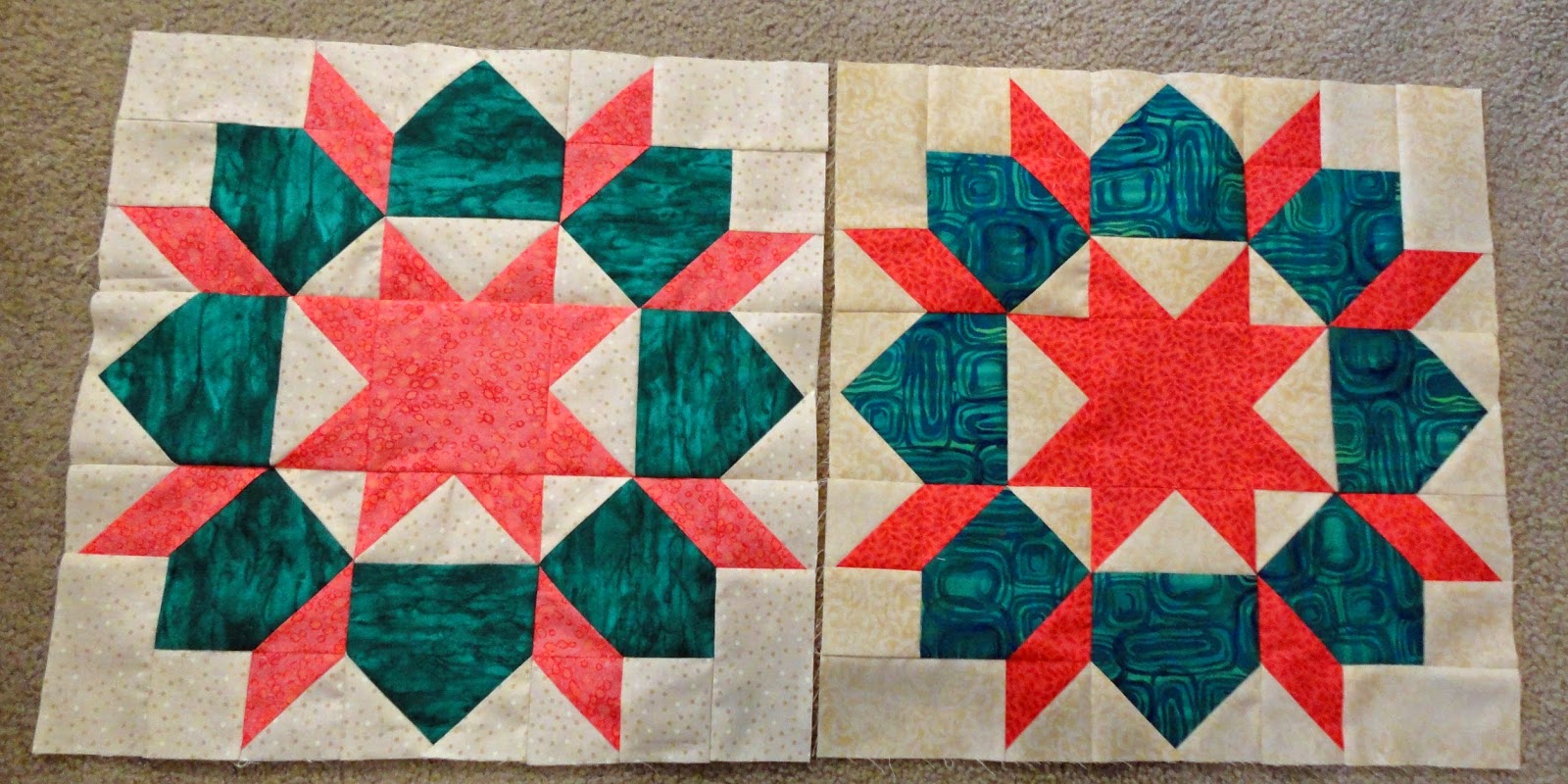 I have begun reading the newest book in Diana Gabaldon's Outlander series. My oldest daughter picked it up for me last weekend. I am looking forward to the mini series on Starz this August. I have actually been waiting for Outlander in movie format since 2000!  There was talk back then, but it has taken this many years to accomplish. Now I have to plan how to get Starz with our DirecTV since it isn't in our present package. 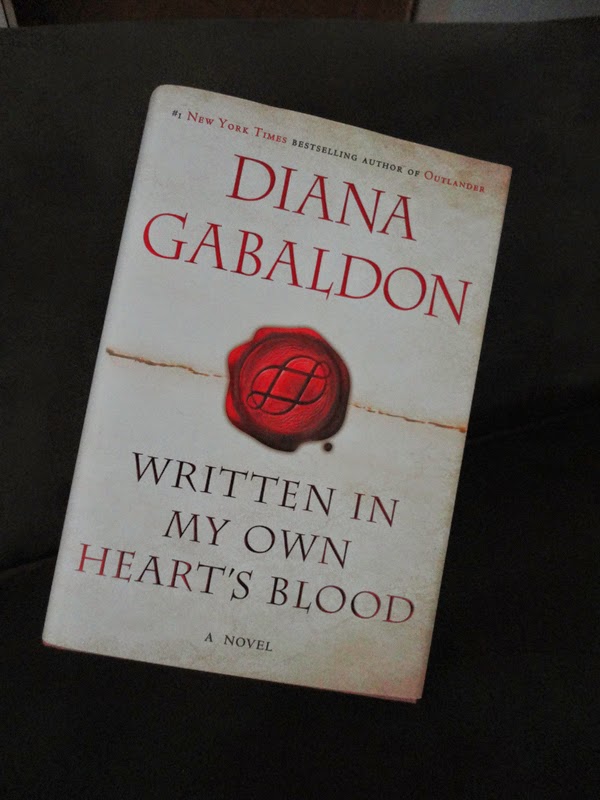 I read a blog that talked about a project titled: Quilt Design A Day. You can find information HERE.
I do not remember the original blogger's link to it and am sorry I didn't bookmark it.

The idea is to design a quilt(s) after looking at the Design Seeds website for that day. The photo has an accompanying color palette to get us designing.

So, last night I tried working with one photo and today I worked on a different photo to designed a quilt.

The cool thing was that today I discovered another gem in EQ7's tools. I could take an EQ color and find a tint or shade that was closer to the Design Seeds palette.

Thought I would share what I did. This is the quilt, based on the sea glass photo from Design Seeds. 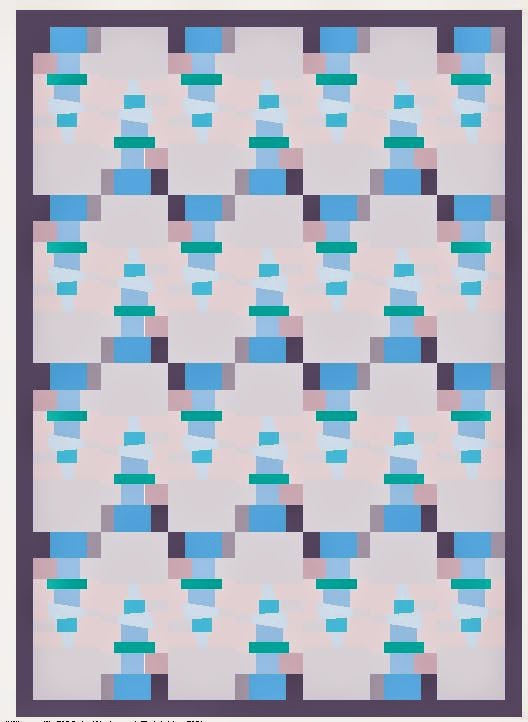 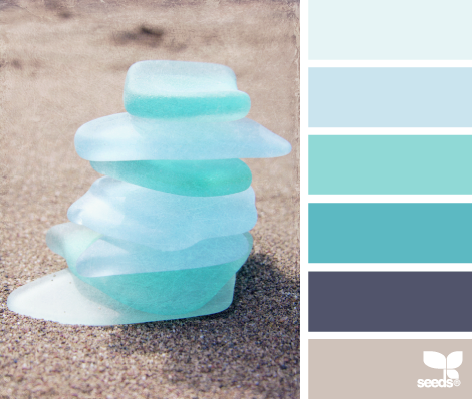 To start, I resized the window for the Design Seeds photo. Then I resized the EQ7 window and placed them next to each other on the screen. When I resized EQ and clicked the color tool paintbrush, the EQ color palette was separate from the EQ window. This made matching colors much easier. 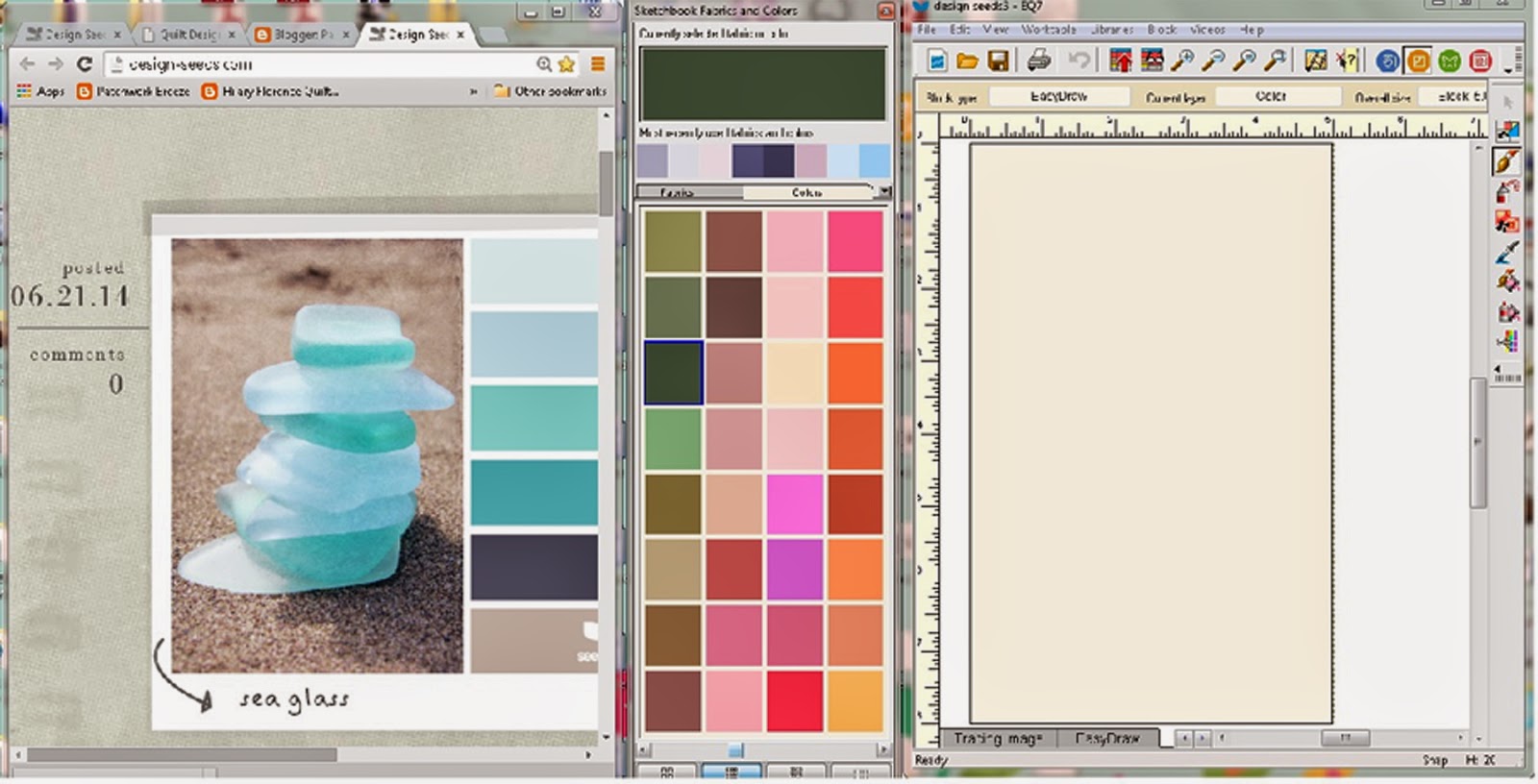 Do you see how the Design Seeds color palette is on the left and I moved the EQ color palette close to it? I could click through the EQ palette and and see how the colors matched as it moved through the choices. I also learned that if I changed the number of colors EQ showed it sometimes helped me see them better as larger boxes. 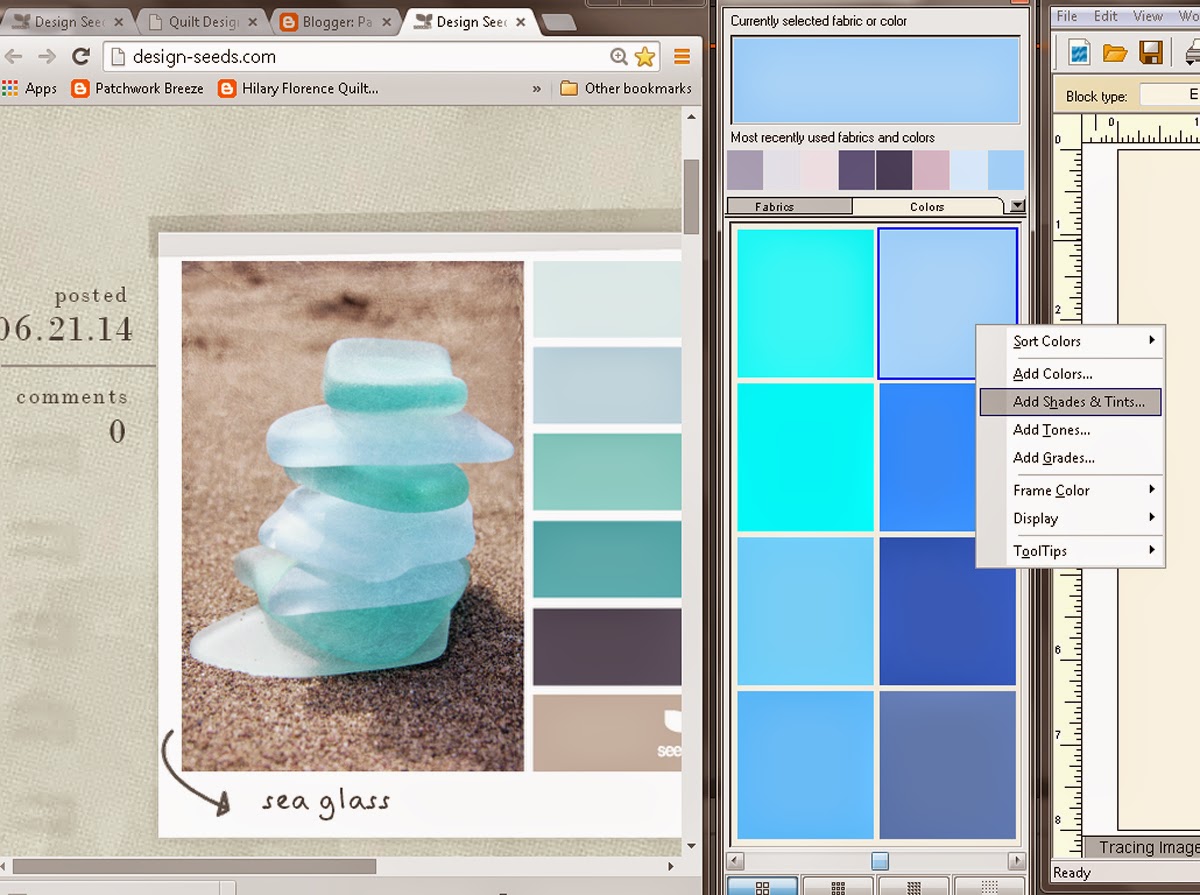 I lessened the number of colors in the EQ palette. I selected one color that I thought was close to the 2nd color from the Design Seeds. I right clicked on that color and got the selection box you see at the right. I highlighted Add Shades & Tints. Then I clicked that selection. 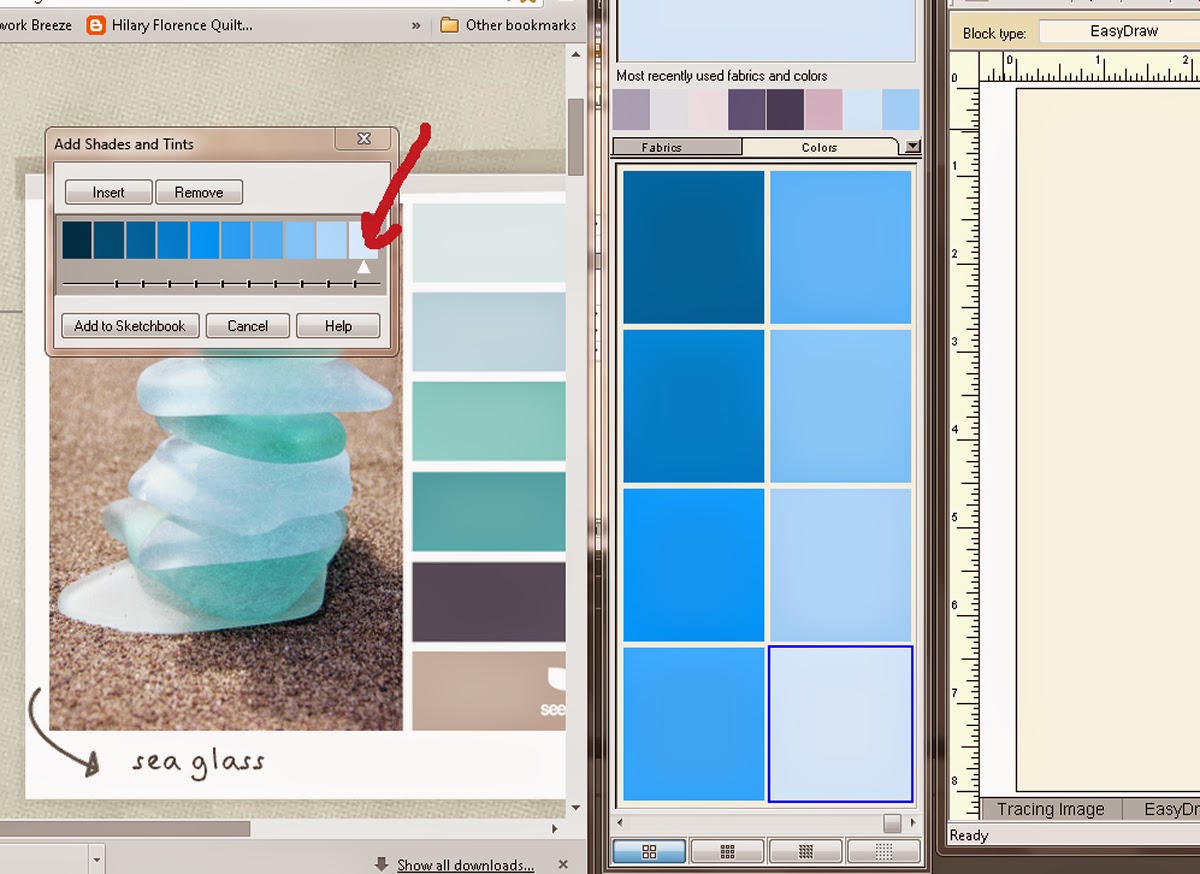 None of the colors really looked close enough to that 2nd color I had chosen on the color palette. But I did notice that the last color looked like the 1st color on the palette so I selected that one.

After selecting the color (red arrow), I clicked on Add to Sketchbook. The new color is inserted at the end of the EQ Sketchbook color chips and is outlined for us to see. (For illustration purposed, I went back, reclicked the original color I selected so the Add Tint & Shade box would pop up again. You can see it and the new color tint at the bottom right in the EQ color palette. This way didn't have so many photos in the blog.)

Now I can use that color in my quilt design.

So we are not limited to the smaller selection of colors in the EQ palette. You don't have to go to the block library and try to find other colors. Now if this tool were only available to change the tint or shade of the Fabrics tab colors, just for the sake of designing.

Have you discovered this tool selection? Are you designing one quilt a day? I think I will try this each day. I may come up with some quilt designs I like. I don't think I have to like each one but I know I am learning as I do this.

Now, off to finish packing. I am going on a Quilter's Bus Trip to West Virginia this next week and looking forward to it. I will blog when I return.

I have done some decorative stitching, so I decided to link to that theme. The quilted wallhanging pictured here was designed by me as my entry into The Quilt Show contest "Big Love" in 2010. The requirements of the contest were to include the word LOVE, use wonky flowers and use embroidery. It was the first time I had entered any contest beyond the local quilt guild challenges. While the quilt did not win popular vote, I feel like a winner by stepping out of my normal realm of quilting by entering.


I included this quilt on my Love-Themed blog on February 14, 2014; but I did not show any of the decorative stitches. So I will show them below.

Thank you for stopping by to take a look. Thank you, Val, for the linky this Tuesday. Be sure to visit the other blogs linked up for Tuesday Archives.