Afternoon Activities on the Road

Our first afternoon stop was the Beckley Exhibition Coal Mine in Beckley, West Virginia. We were fortunate again that the rain stopped when we arrived. Our group of 56 quilters were divided in half. The group I was in first toured the museum with many photos and various tools and equipment used by mines through the years.

We then went on the tour of a vintage coal mine. We boarded a coal mine “man trip” driven by a guide who was a veteren miner. 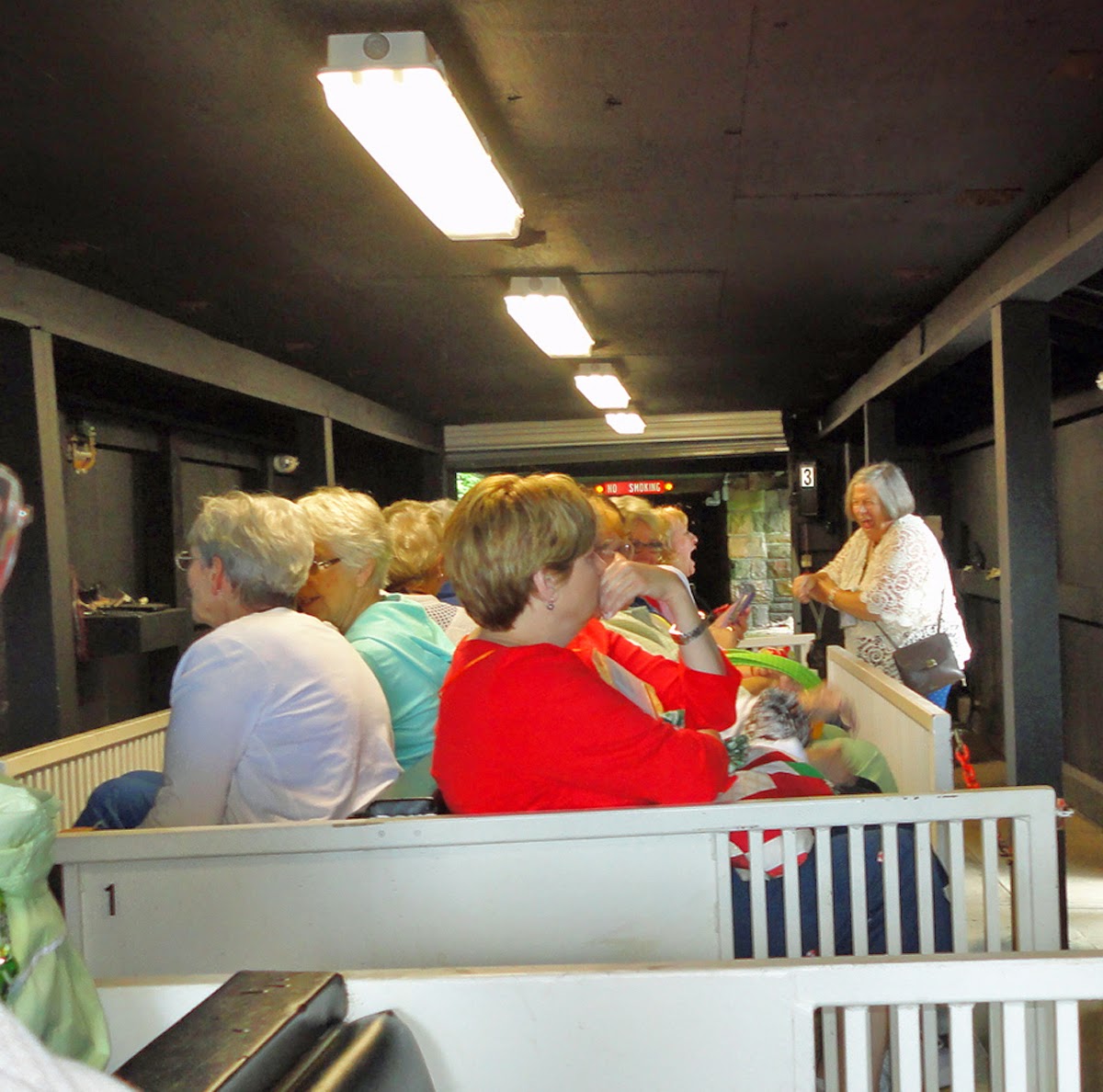 We were given general information about the mine and the history of coal mining in the region. The Beckley Exhibition Coal Mine is a “drift mine” and the track goes 1500 feet up and around various mined out areas. Stops are made at these areas and the veteran guides give in-depth information on the mining methods and equipment seen. 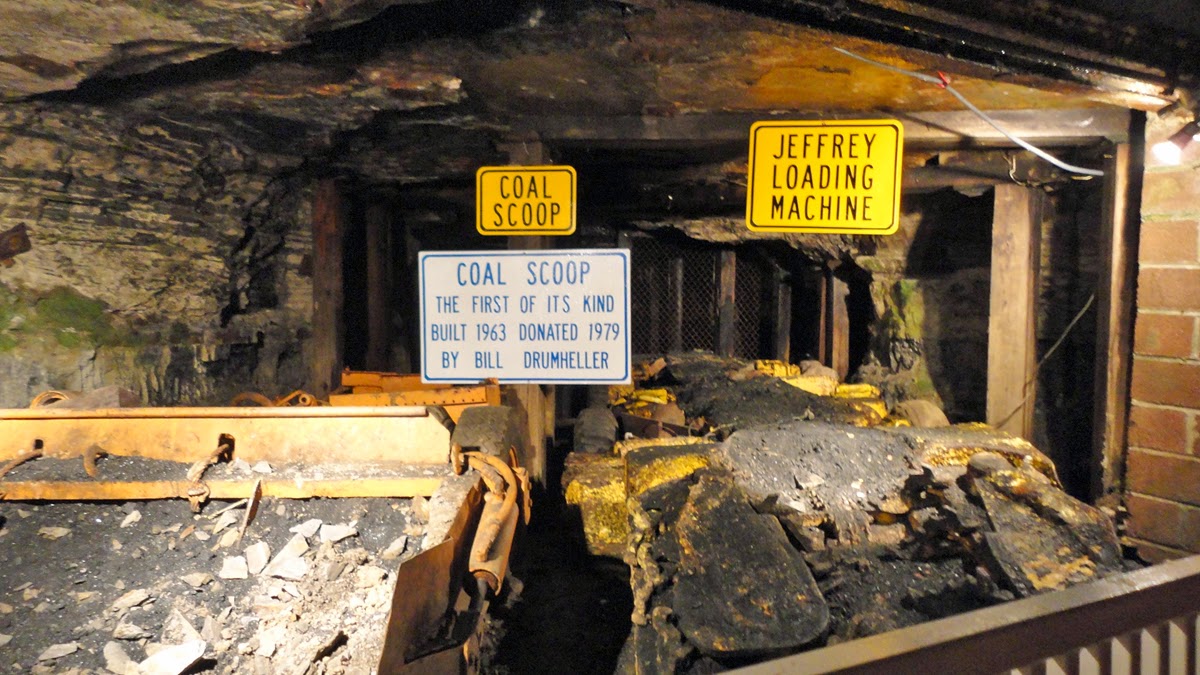 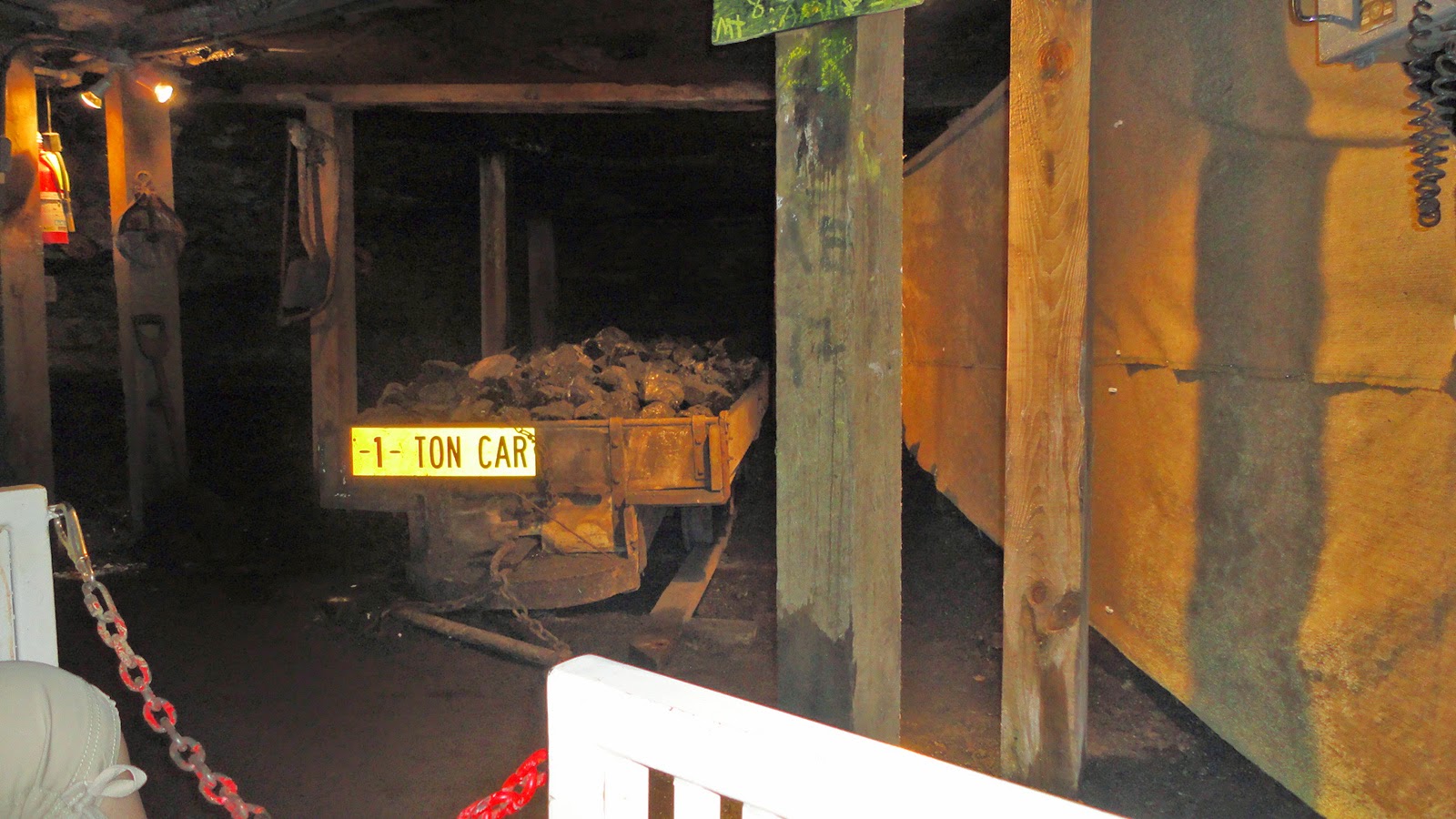 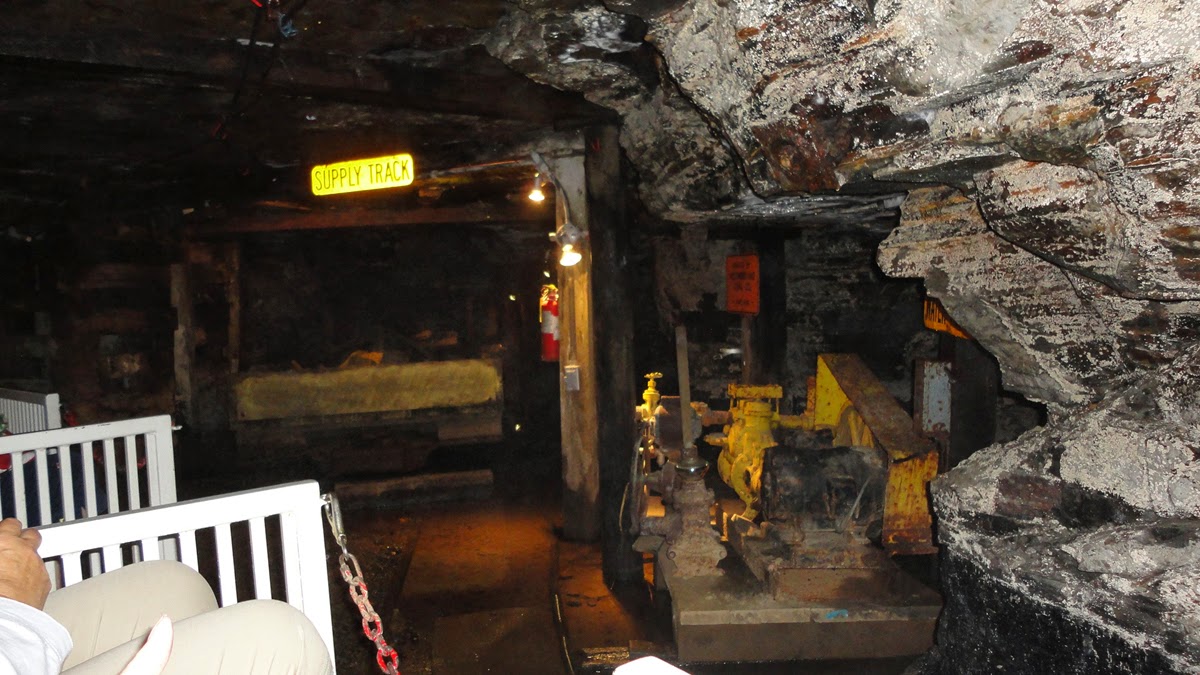 The most interesting information I took in was that in the early days of mining in this mine, the vein was only 28 inches high. The miners had to work on their stomachs to get the coal out. They had to load the 1-ton cars which were pulled out of the mines by small ponies that were blind because they worked in the dark all their lives.

Our next stop was Tamarack, "The Craft Center of West Virginia". And what beautiful artwork we saw! I did not take photos of any of the work out of respect to the artisans whose work is displayed and sold there. (They were not present for me to ask permission.) I suggest you click the link above, which will show you some of the displays.

I did take a photo of the Fried Green Tomato sandwich and the peach dessert I had. We were told this was what we should order as it was the best! The food court is managed by Greenbrier Hotel and everyone said their meals were wonderful. 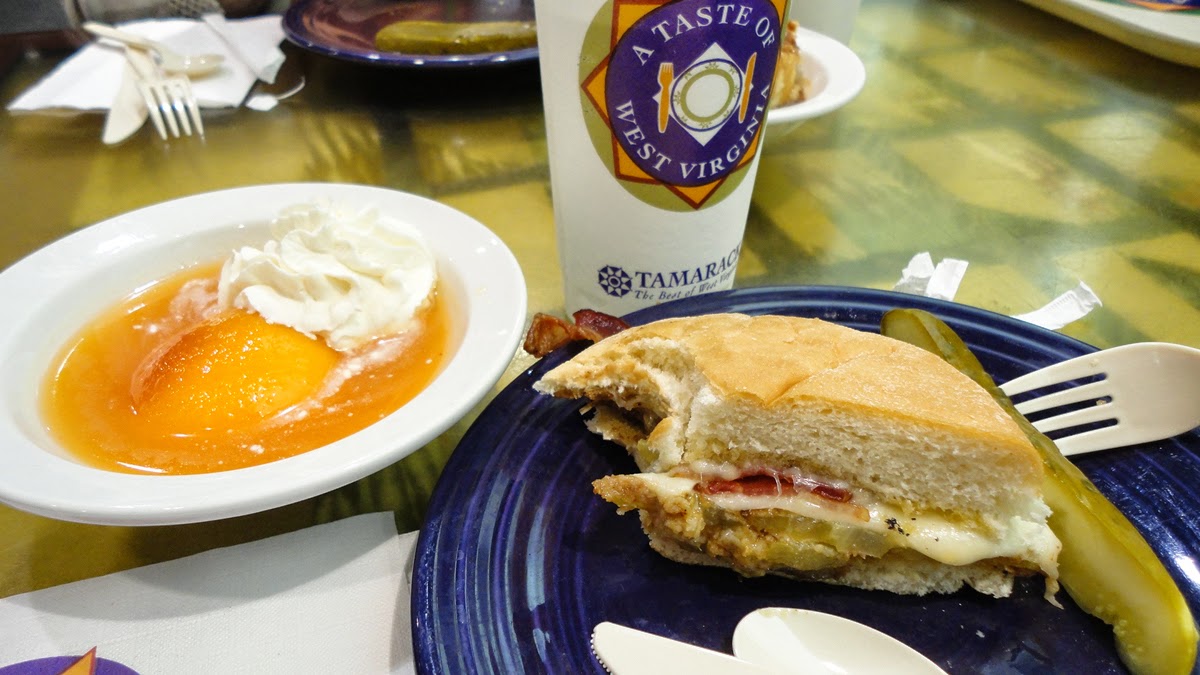 Well, I did like it after I was told to put some of this lucious Red Raspberry Honey Mustard on it! Of course, I had to buy a bottle to bring home.

Our final stop before the hotel was A Quilt Nook in Ripley, West Virginia. What a nice shop. We walked in to a delicious table of tiny desserts and water or iced tea (sweet or unsweet). I wish I had taken a photo of the tiny, beautifully decorated cupcakes, tarts and cookies. They were homemade and tasted like they came from a top-notch pastry chef! 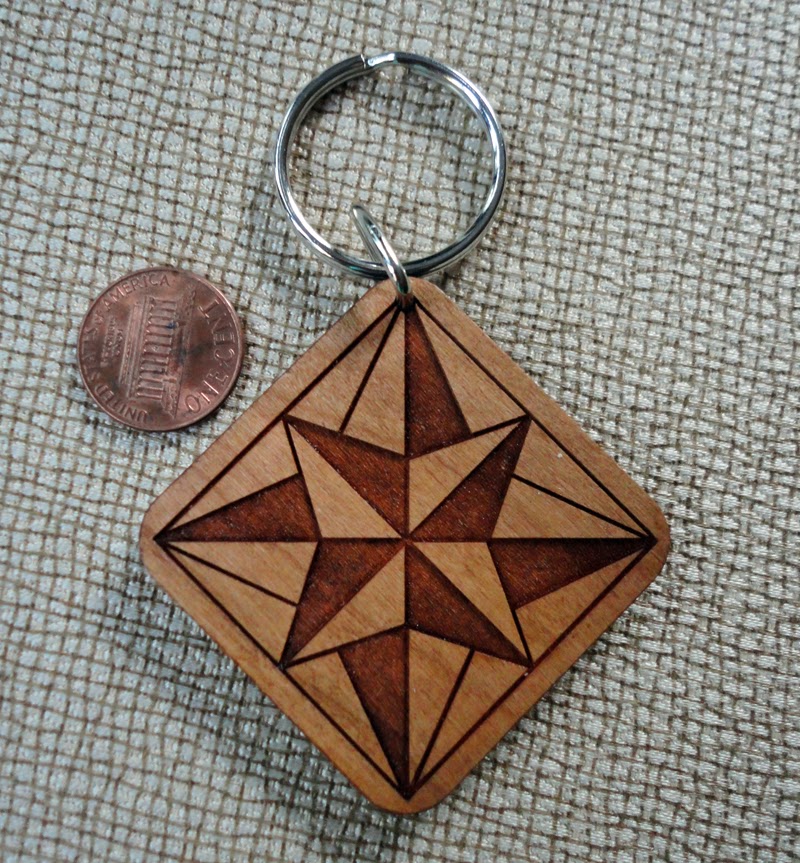 The shop had a sale going on, which none of us could resist. We bought patterns, books, fabrics and other little gizmos and gadgets.  One item I found was a wooden key chain with a quilted block pattern that I really like.


I also bought a book, two patterns and a fat quarter of pink fabric with the map of West Virginia outlined all over.

Our last destination for the day was Mineral Wells, West Virginia, to settle into our MicroTel Hotel rooms for a well-needed night's sleep.

Come back on July 5 as we visit a restored theater, another quilt store, and a special resort.

To all of those in the United States--Happy Independence Day!

Love that key chain!!! You ladies look like you are just having the best adventure! I'm enjoying watching from afar...thanks for sharing!